The newly renovated lobby of the Queensbury Hotel is a charming blend of old and new. Walking in, you are greeted by a cheerful flower arrangement on a round black table and pristine white columns that soar to the open mezzanine. Large, two-story windows flood the lobby with natural light and the original terrazzo floor gleams with polish under the original brass chandelier.

To one side, modern wingback chairs and an oversized tufted bench sit in contemplation of a cheerful fire burning in the large grate under a century-old painting of Cooper’s Cave and The Last of the Mohicans. Throughout the lobby, furniture groupings in blacks and grays with touches of red and gold pull the 1920’s black, white, and gold terrazzo floor seamlessly into the 21st Century. 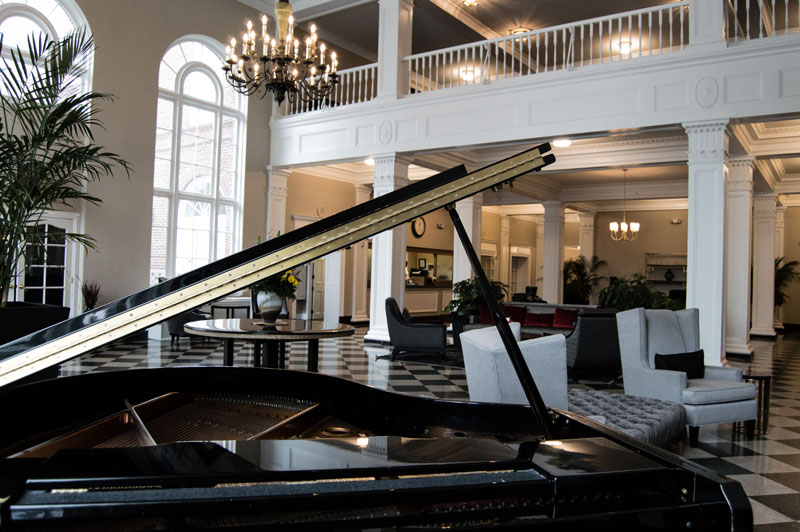 Welcome to the Q

New owner Ed Moore, his son Zack, and Tyler Herrick took over management of the Queensbury Hotel just about a year ago on March 28, 2016. Since then, the Q has begun an amazing transformation that is sure to delight locals and visitors for years to come.

Working with Phinney Design Group of Saratoga Springs, the Moores and Herrick have conceived a boutique hotel that wouldn’t feel out of place in one of the nation’s largest cities, yet somehow manages to retain its small city appeal.

Plans to become a registered historical site and historical hotel are well underway a mere year after the Moores took over ownership. It is obvious in the attention to detail in current and pending renovations that the hotel’s historical and community significance is always top of mind for general manager Tyler Herrick and the Moore family. 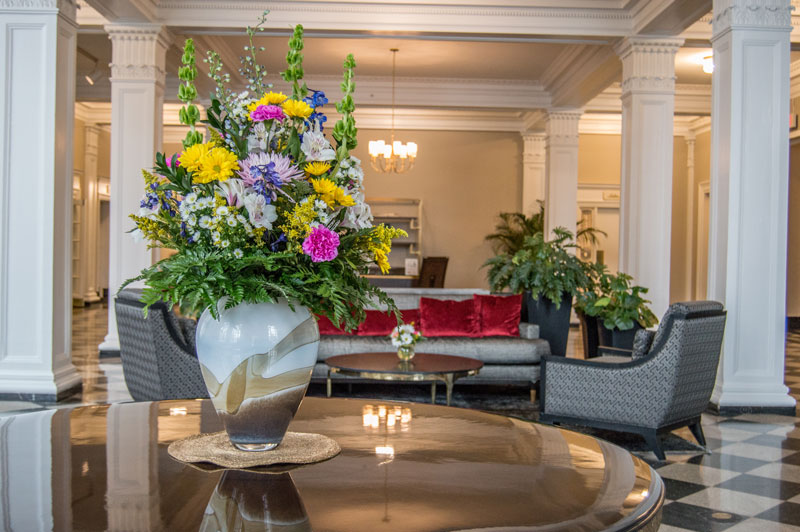 An example of this commitment to restoration is obvious and immediately underfoot as soon as you walk in the door. Last year when lobby renovations began, they tore up the wall-to-wall carpeting and found something wonderful: the original 1926 terrazzo floors. Immediately they scrapped their plans to lay a new tile floor and began investigating how to restore the terrazzo to its original beauty. A year later, most of the floor sparkles while a few patches damaged by the carpet laying await expert restoration by a company specializing in terrazzo flooring and speak to the character and history of the 90-year-old building.

“The support from the local community has been unbelievable,” said Herrick. “I’ve been blown away by what the building means to the community. People stop by with stories and artifacts that really show what the Queensbury has meant to the residents of Glens Falls through the generations. We’re not like every hotel. We’re different. We’re part of the community. And that means a lot to us.”

In keeping with this commitment to community, the Q has been partnering with local businesses for its renovations and updates. From contracting Hank’s Quality Flooring to lay a brand new, custom popsicle-plank ballroom dance floor in a herringbone pattern (that took two painstaking weeks) to installing bathroom vanities by Miller Mechanical and Adirondack Precision Cut Stone in the lobby that will be echoed in all the guest rooms, renovations at the Q are done with an eye to history, the community, and the local economy.

The first year of their renovation plan has focused mainly on updating the infrastructure and public areas of the hotel. By the end of their second year of ownership (March 2018) the Moores plan to have all the guest rooms renovated, at which time they will begin a large expansion project with the help of Downtown Revitalization Initiative grant funds.

This expansion project will double the size of the Adirondack Room, giving the Q capacity to host events for 300-400 guests. Other than the Sagamore and a few event spaces in Saratoga Springs, the Q will be one of the only places in the area able to host events of that size.

Dining & Entertainment at the Q

The Q has two restaurants, Park 26 and Fenimore’s Pub and Lounge. Wednesday through Saturday is live music at the Q, with jazz in the lobby and acoustic in Fenimore’s. The full schedule can be found on their website.

Park 26, which just opened, is a refined dining restaurant serving breakfast and lunch daily with dinner being served Thursday-Saturday for now. There is a back bar area perfect for small events and plans for patio seating along Maple Ave and in the cozy courtyard behind the restaurant as the weather gets nicer.

Both restaurants have undergone some renovations, with new flooring and décor. The walls of Park 26 are lined with old photographs of Glens Falls from the 1920s – 1940s, sourced from the Chapman Historical Museum and matted and framed by Blackburn Gallery. “They really helped bring the city to life for us,” said Herrick.

One kitchen, which itself has undergone significant updates and renovations in the past year, serves Fenimore’s and Park 26, caters events, and handles room service.

Staying at the Q

While we were at the hotel, Herrick took us up to see some of their in-progress guest rooms on the fourth floor. The new rooms and suites have a residential feel, with LVT wood flooring, cool blue walls, updated bathrooms that echo the contemporary nouveau feel of the lobby restrooms, and spacious closets.

Guests who have stayed at the Queensbury previously may remember rooms in yellow tones with aging furniture. Though the new furniture has not yet arrived, Herrick and the Moores have worked hard to make incremental improvements to the rooms, including all new mattresses bought from Bennington Furniture in Queensbury and made at the Seward’s factory in Albany. Other updates to the rooms were flat screen TVs and all-new linens.

Herrick expects their current fourth floor room renovations to be done by Memorial Day, at which point guest room work will go on hiatus until after the busy summer season.

What to Expect Next at the Q

More renovations are in the pipeline for the hotel’s guest rooms, event space, and even the lobby.

The large painting of The Last of the Mohicans by Griffith Baily Coale is scheduled to undergo its own restoration after nearly one hundred years of hanging over a wood burning fireplace in a lobby where cigar and cigarette smoke almost surely hung thick in years gone by. Herrick reached out to Erin Coe at the Hyde Collection for a restoration recommendation, and an Upstate NY firm will restore the painting.

Be sure to keep your eye on their website for announcements of upscale patio dining at Park 26 and check in to see if the small courtyard behind the restaurant has been strung with romantic strings of Edison bulbs over cozy terrace tables.

One thing that will not be changing is the mail shoot, which runs from the top floor all the way to the lobby and still has regular daily pick up by the US Postal Service. In combination with the original wooden mail slots behind the reception desk, the decision to keep the original brass mail shoot is another example of how old-world charm pervades every aspect of the Q. We can’t wait to see what they do next!

Discover more about the Queensbury Hotel >>