It’s the Adirondack Winery’s 9th anniversary – join in on the celebration with a wine tasting! We also have a beard contest, a 5K, and five other great events to check out. 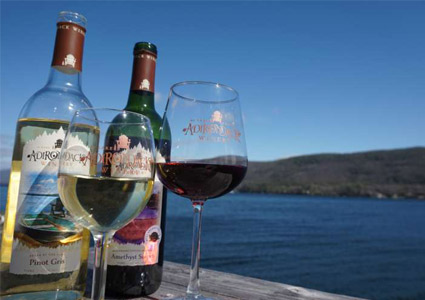 Cheers to the Years! 9th Anniversary at Adirondack Winery

Head to the Adirondack Winery in Lake George this weekend for the ultimate wine tasting in honor of their 9th anniversary! There will be local food producers on hand with samples and demos, entertainment, games, prizes, and a wine tasting complete with the debut of a brand new wine.

Got a beard? Whether it’s real or fake you can enter this awesome contest – proceeds go to the Chapman Historical Museum of Glens Falls! The Lake George Brewing Company is hosting the Wild Whiskers Beard Contest with the following categories: Mountain Man, Resting Beard Face, Not Fully Committed, Moustache You a Question, Whiskerina, and Biggest Beard From Scratch (for this one you must have provided a photo of being clean shaven as of March 8th).

The event includes beer and soda provided by Lake George Brewing, beard products will be for sale on site, and a professional barber and tattoo artists will also be on hand to provide trims, shaves, and tattoos. The contest entry fee is $20, which includes two drinks and additional products, and general admission is $5, which includes one drink.

New Country of Saratoga is sponsoring a 5K at West Mountain – this is an all-mountain 5K obstacle race. The race will be divided into age groups, with a free, shorter obstacle course for the youngest participants. A complimentary barbecue will follow the race, along with live music from James Hood. You can still register for the 5K, with the cost varying between $25 and $35.

Saratoga Sings! of Art and Inspiration

Opera Saratoga is presenting a free concert of opera and song at The Hyde, inspired by great artists and their amazing works.

The fourth annual Lake George Mom Prom is being held at the Fort William Henry Hotel and Conference Center. This is a fun event for not just moms, but all women ages 21 and up. Grab your old prom dress and dance the night away! Tickets are $60, with proceeds benefiting The Mom Prom Help Fund, the Lake George Floating Classroom, 11th Hour Canine Rescue NY, and Victim Advocacy Services of Warren County.

The Howl Story Slam happening at the Davidson Brothers Restaurant & Brewery is an open microphone storytelling competition for anyone with a five-minute story to share. The theme for this night is “The First Time I Ever…”

For just $10 ($8 for seniors and students) you can catch a funny, modern play at SUNY Adirondack about a circle of friends and family “whose lives are poised between happiness and heartbreak.”

Head to the Hudson River Music Hall this weekend for a fundraiser for cystic fibrosis and enjoy live performances from the Jonathan Newell Band, Kings English, Ricky and the Dingo, The Resolutions, Kim Skoll, Shakin’ Off the Rust, and Breadfish. Admission ranges from $15 to $30.

Celebrate live local music video at the Strand Theater with some of the acts that have performed in front of the cameras over the years: Phillips Head, Let Go Daylight, Two Guys, TR Wilson, One Man Dead, Margot Malia, Underpass Prophets, and Saint Ukraine. There is a minimum donation of $5.

Plan your whole weekend! Find more events to browse at the full events calendar and check out more things to do in Glens Falls >>