Official Guide to the Greater Glens Falls Region
Enter Giveaways Advertise
Home  »  Events  »  Get Your Opening Night Tickets For The Adirondack Thunder vs. The Brampton Beast

Get ready to enter the Thunderdome! Our hometown team the Adirondack Thunder is preparing for their Opening Night on October 14 against the Brampton Beast at the newly-named Cool Insuring Arena, and fans can purchase tickets for this exciting matchup starting Monday, September 18! 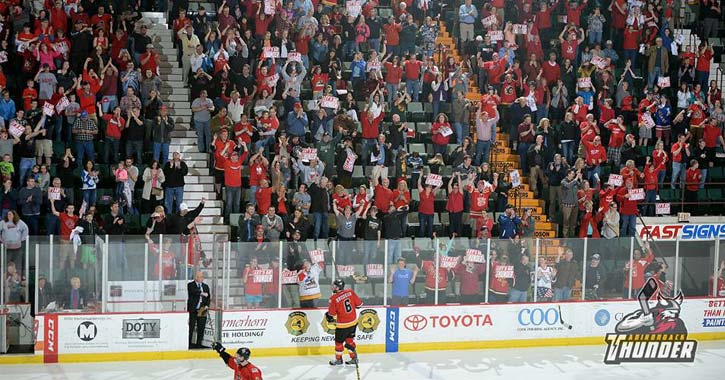 When the Adirondack Thunder face off against the Brampton Beast to help kick off the 2017-18 ECHL season, it will be their first regular season home game at Cool Insuring Arena (formerly named the Glens Falls Civic Center). This will be the Thunder’s third year as a member of the league; their first two seasons resulted in playoff berths.

If you want to support our hometown team as they look toward the Kelly Cup Playoffs once again, then be sure to attend Opening Night. Tickets for this game will go on sale starting at 10:00am on Monday, September 18, at the Cool Insuring Arena Box Office and online at coolinsuringarena[dot]com.

Get Your Single-Game Tickets & Season Passes

Full and half season ticket packages are currently available at $13 per seat anywhere in the arena.

Glens Falls native and two-time Adirondack Hockey Hall of Fame inductee David Strader was the first professional broadcaster at the former Glens Falls Civic Center. He spent six seasons as the voice of the Adirondack Red Wings and then called games for the NHL, ESPN, ABC, Fox, and more national news outlets.

In recognition of his achievements, a press box at Cool Insuring Arena will be named in his honor at a dedication ceremony on Saturday, September 16, at 11:00am. The ceremony will be open to friends, fans, and the general public.

Find more things to do in the Glens Falls Region >>