100 years ago, New York State became the 12th state – and the only one in the northeast – to grant American women the right to vote. In celebration of this historic event, the Glens Falls Area Suffrage Centennial Committee will present a 1900 Suffrage Convention Reenactment on Saturday, October 21, in Glens Falls. 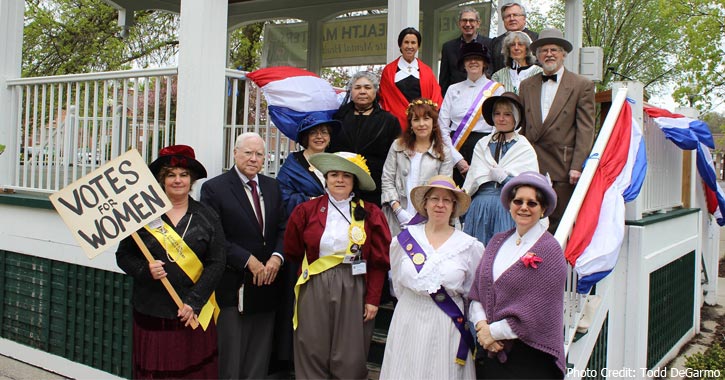 The Glens Falls Area Suffrage Centennial Committee was formed to plan and coordinate local events that would commemorate the 100-year anniversary of women’s suffrage in New York State. Members include the Chapman Historical Museum, the Warren County Historical Society, Crandall Public Library, and other institutions and individuals.

The committee’s goal is to educate people about the struggles suffragists faced and to reflect on the Suffrage Movement today.

On Saturday, October 21, at the First Baptist Church in Glens Falls, everyone is welcome to attend a 1900 Suffrage Convention Reenactment. This event will reenact the New York State Woman Suffrage Association Convention that was held at Rockwell House and Ordway Hall in Glens Falls in the autumn of 1900.

During the 1900 convention, suffragists from around New York State were in attendance, including people from Cayuga, Chautauqua, Erie, Kings, Monroe, Nassau, Niagara, Onondaga, Oneida, Queens, Warren, and Washington Counties. The committee hopes all of these counties will be represented at the event.

Attendees are encouraged to wear Victorian-style costumes, but it is not mandatory. Admission is free.

Don’t miss out on this historic reenactment in Glens Falls!