Fans of Warren County’s bike trail may have something to look forward to in the near future. After years of consideration and conversation, a plan to extend the Warren County Bikeway from Lake George to Warrensburg has finally been proposed! Possible routes were discussed with Lake George municipal officials on May 21, resuming a discussion which began at the May town board meeting one week earlier. 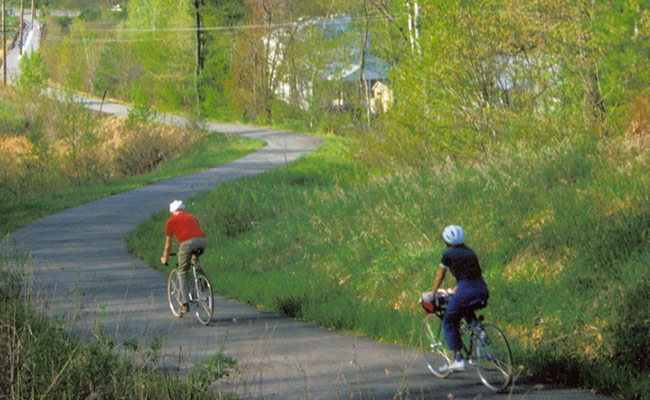 The preferred route, described by Adirondack-Glens Falls Transportation Council Director Aaron Frankenfield at the May 21 board meeting and detailed in a recent article by Sun Community News, extends the Bikeway 7.1 miles past its current endpoint at Lake George Battlefield Park. The extended route would move southwest, up West Brook Road to Canada Street, then up Canada Street to Mohican Street. From there, the route would travel through the Village’s residential backroads before eventually re-joining Route 9 near Exit 22. It would continue up Route 9 to Bakers Crossing, and then onto County Route 60, ending just two blocks from downtown Warrensburg.

An alternate route could take bicyclists along Beach Road, Village Mayor Robert Blais told Sun Community News, which would generate bike traffic past the Visitor Center and public restrooms. However, ideas of a “bicycle boulevard” through Beach Road’s median have been put aside for now, citing the road’s multi-million dollar reconstruction project that wrapped up just five years ago.

The Bikeway extension could become a reality within the next one to five years. Talk of another extension into Chestertown and North Creek may lead to a bigger project on the horizon.

But for now, the Lake George-Warrensburg plan is the main focus of upcoming discussions. The route will be brought up again in a June informational meeting, where the draft will be presented to the public. So we want to know: what do you think of the idea?