Attention, hockey fans! With the 2018-2019 season well on its way, the Adirondack Thunder is  announcing new details sure to get you excited for another great year. From ticket plans and perks to a brand new app partnership, here’s what you can expect when the Thunder rolls in this fall. 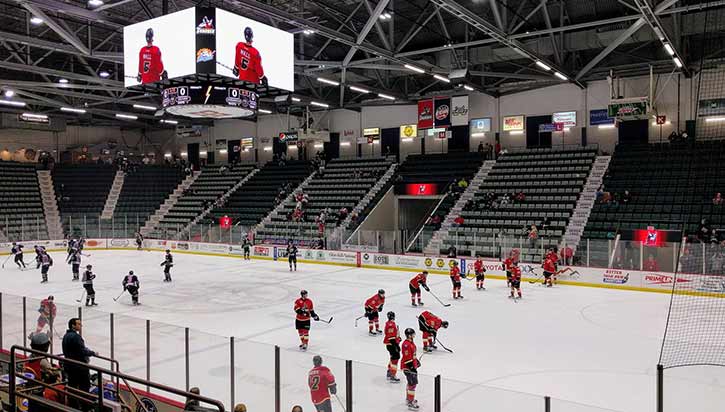 The Adirondack Thunder has recently announced their ticket packages for the 2018-2019 season. For another year, season tickets will be $13 per ticket per game: $540 in total. And if you’re bringing your littlest fans along, don’t forget that children aged 12 and younger can get their season tickets at a youth rate of $387.

As an ECHL affiliate of the New Jersey Devils, season ticket holders will also be given a free ticket to one of the following Devils games:

“We are very excited to once again be able include an NHL ticket to our parent club in our full-season ticket package,” General Manager Jeff Mead said in a statement. “We would like to thank Tom Fitzgerald, Ray Shero and the Devils organization for again extending this offer, one of the biggest season ticket holder perks we have seen across the league. We have an amazing season ticket holder base in Glens Falls and it feels great to be able to give something like this back to them.”

In addition to the full-season package, the Thunder is offering a half-season plan. This option features tickets to 18 home games of your choice, including the first two Kelly Cup Playoffs games (normally priced at $288). For more information on full or half-season packages, contact Sean Driscoll at 518-480-3355 ext. 319 or sdriscoll@echlthunder.com.

At a price of $15 per ticket for a single game and including a free popcorn and soda, group tickets are available for groups of 10 or more. Fundraisers for groups are also available, allowing your organization to take home a portion of ticket proceeds. To book your group tickets for the 2018-2019 season, contact Molly Coventry at 518-480-3355 ext. 315 or mcoventry@echlthunder.com.

Reduced from ten game packages to eight games, Flex Packs for the 2018-2019 season are now just $128. Flex Tickets can be redeemed for a silver section single game ticket to any Thunder regular season home game.

The Thunder has also announced a partnership with an online auction app that will let you bring the hockey experience home with you! According to a recent press release, the LiveSource mobile app is now available for download on iOS and Android devices. It will allow fans to:

“We’re thrilled to be in business with Jeff Mead and the entire Adirondack Thunder organization,” LiveSource founder and CEO Scott Levin said in a statement. “Get ready fans, the Thunder will be able to unleash thrilling opportunities at a moment’s notice. Just check the LiveSource instant marketplace because whenever cool things happen during games and events, an opportunity to bid is sure to follow moments later.”

Amazingly, the Thunder is the very first ECHL team to partner with LiveSource. We can’t wait to see what this exciting addition will bring to this hockey season!

In other exciting news, the Adirondack Thunder has named Glen Lake resident Pete Dineen as their Associate Coach for 2018-2019. An Ottowa native, Dineen worked 25 years as a scout for teams like the Minnesota North Stars, Philadelphia Flyers, Florida Panthers, Boston Bruins, and Columbus Blue Jackets. From 1994 to 1996, he was in charge of the International Hockey League’s Houston Aeros, making important roster decisions and assembling their coaching staff.

“Coach Dineen has a widespread knowledge of the game from many different facets and we believe he will be an asset in helping to mentor and develop the players that we bring in,” said Thunder Governor Ed Moore in a statement. “Having played, and now living in the Adirondack region, Pete’s familiarity with the team and the area made this an easy choice and we are happy to have him on board.”

Dineen played professionally for 11 seasons throughout the AHL, IHL, and NHL, and won the 1989 Calder Cup championship with the Adirondack Red Wings. He seems to be the perfect choice for this upcoming season with the Thunder!

“I am extremely excited to be joining Coach Loh and the Thunder on the bench for the upcoming season,” added Dineen. “I know firsthand what a storied hockey town Glens Falls is and I can’t wait to be a part of that excellent tradition. After my many years in the industry, coaching has always been a possible next step for me, and my family and I are thrilled it gets to start here with the Thunder.”

Don’t miss a game! Check out the Thunder’s home schedule »