Wondering what to do for Labor Day Weekend? Wonder no more. There’s fun for everyone in the Glens Falls area with a number of live music performances, a great exhibition at the Hyde, and plenty of road trip-worthy events. 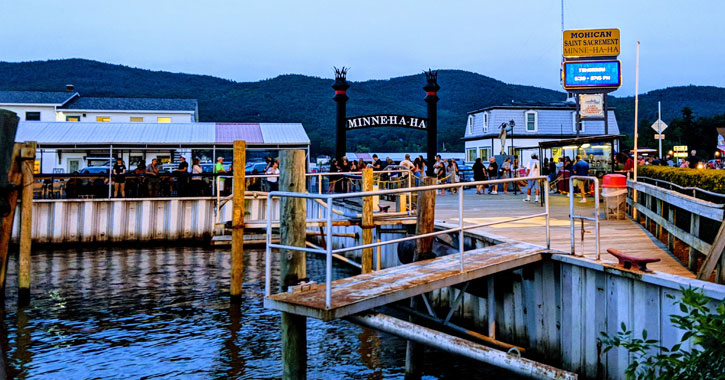 The Lake George Steamboat Company is celebrating Labor Day Weekend with fireworks and live music on both the Minnie Ha Ha and Lac du Saint Sacrement. Tickets are $25 for adults.

Get ready to rock out at the annual Adirondack Independence Music Festival at the Festival Commons at Charles R. Wood Park in Lake George! There’s no better way to celebrate Labor Day Weekend than with a fantastic lineup of bands that includes Keller Williams, Let’s Be Leonard, Formula 5, Pink Talking Fish, and many more.

Can’t make it to the festival? Head to Lake George on Labor Day, September 3, for a “Last Chance Beach Party” at Shepard Park.

The 13th annual Lake George Triathlon Festival is this weekend. Online registration is now closed, but if you’re interested in participating you can register in person at Fort William Henry on Friday night. Spectators are free.

Live Music Worth Checking Out

Attention Hamilton fans: you can sing along with “Hamiltunes” at The Park Theater on Friday evening. Local talent will sing the character roles and there will be multiple opportunities for audience members to join in. There is a suggested donation of $10.

Billy Wylder at The Park Theater

You can enjoy rock music with American folk and West African influences from Billy Wylder at The Park Theater on Saturday.

The HRMH House Band at The Strand

The Hudson River Music Hall House Band will be once again performing their British Invasion Music show at The Strand Theater. If you’re a Beatles fan this will be a fun one to check out. Admission is $10.

Ernest LaRouche at The Strand

Ernest LaRouche will be performing at The Strand on Saturday. His music focuses on 70s and 80s rock, and tickets are $15.

Fill up on delicious BBQ and listen to live music from country music superstars Lee Brice, Frankie Ballard, and Clare Dunne at 100.9 The Cat’s Big Cookout on Sunday. The music festival will be held on the grounds of the Saratoga Casino Hotel, located just outside downtown Saratoga.

Take a Drive to the Great Schaghticoke Fair

If there’s one event that’s worth the drive this Labor Day Weekend, it’s the 199th Annual Schaghticoke Fair. Recognized as the third oldest fair in New York State, the Great Schaghticoke Fair will showcase traditions both new and old, from spectacular midway rides to tasty treats and thrilling shows & performances. Best of all, kids ages 13 and under get in for FREE.

One More Weekend of Racing

Closing Day at the Track

If you haven’t made it to Saratoga Race Course this summer season, then don’t delay! The final day of racing at the Track is September 3, and it will feature the 114th running of the Grade 1, $350,000 Hopeful for two-year-olds. Come watch some potential standouts in next year’s Triple Crown series and Travers Stakes.

Just for the Kids

Kassia’s Play Dates, the drop-off babysitting center in Queensbury, is celebrating one year in business. There will be a meet and greet with Sky and Marshall from Paw Patrol, face painting, pizza, and more. The cost is $15 per child (or $20 to include face painting). You need to RSVP by Wednesday the 29th, although you could certainly call past that date to see if there are still openings.

Bring the little ones to the World Awareness Children’s Museum on Friday morning for a story and a craft with a cultural theme. This program is appropriate for ages three and up and is free with museum admission.

What’s Happening at The Hyde

There are two cool exhibits to check out at The Hyde right now:

If you haven’t checked it out yet, The Hyde currently has a really cool exhibition going on featuring landscape paintings from female impressionist painters. Few women artists from the 19th century achieved the recognition they deserved, and this exhibition looks at the work from 15 female painters who were able to make a name for themselves.

Jane Peterson: At Home and Abroad

Jane Peterson is one of the impressionists that currently has work displayed at The Hyde. She was extremely popular among art collectors of her time and was known for using broad strokes of color and playing with light to create movement in her works.

Visit a local park this weekend >>