How often have you told someone you live in New York, only for them to reply, “oh the city, that’s cool!” Once, twice, three times too many? This is a problem Upstate New Yorkers deal with regularly, and to be frank, Twisted Sister had it right when they said We’re Not Gonna Take It.

Upstate New York, prepare to unite. No longer should we have to tell people, “I live in New York State, Upstate, not NYC.” In fact, as a solution to this pressing issue, an initiative called FREE Upstate has been taking steps to turn the secession of Upstate New York into a reality. 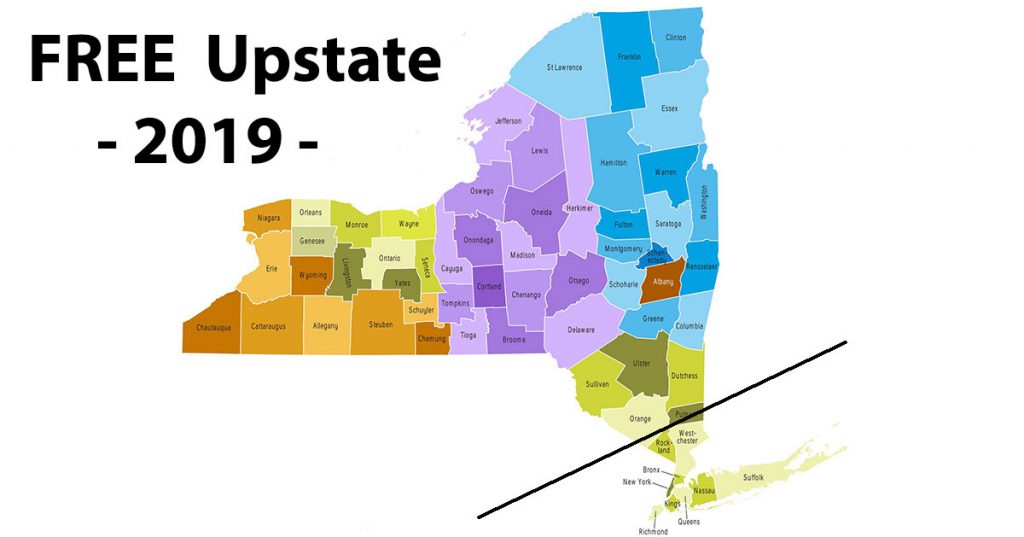 For many years, New Yorkers have debated the boundary between Upstate New York and Downstate New York. Some people believe Upstate consists of communities north of Westchester and Rockland counties, and others have argued anything north of Albany is Upstate. Occasionally, you’ll also find people who have split the state into four pieces: Upstate, Downstate, Central, and Western.

While this great debate continues to rage on, an Upstate NY-based initiative called FREE Upstate aims to settle it once and for all by having the region secede from the rest of New York.

Is Secession the Solution?

As crazy as it sounds, this isn’t the first time residents have called for part of New York State to secede. Back in 2015, multiple groups wanted to liberate Upstate New York from the clutches of Downstate’s influence. Even this year, lawmakers have revived the argument that New York State needs to be split in some way.

There are several political and economic reasons people want Upstate to become its own U.S. state, but the crux of the matter is the never-ending confusion over which part of the state you live in.

FREE Upstate is an initiative made up of local public officials, leaders, businessmen, and property owners who live throughout Upstate New York, from Buffalo to the Adirondacks and Albany. Their goal is to rally enough support from community members to convince the government to take action. In the coming months, meetings will be held in major cities and towns to raise awareness of FREE Upstate’s plans.

Based on these updates, secession could be in New York State’s future sooner than later. What are your thoughts about the initiative? And, what name should Upstate New York adopt?

*Are you interested in joining FREE Upstate? Unfortunately you’ll have to wait, as this story is just an April Fools’ joke!