Chad Rabinovitz, Producing Artistic Director for the Adirondack Theatre Festival, started out the 2020 announcement last night by saying he was terrified the audience was going to give him golf claps and polite nods. 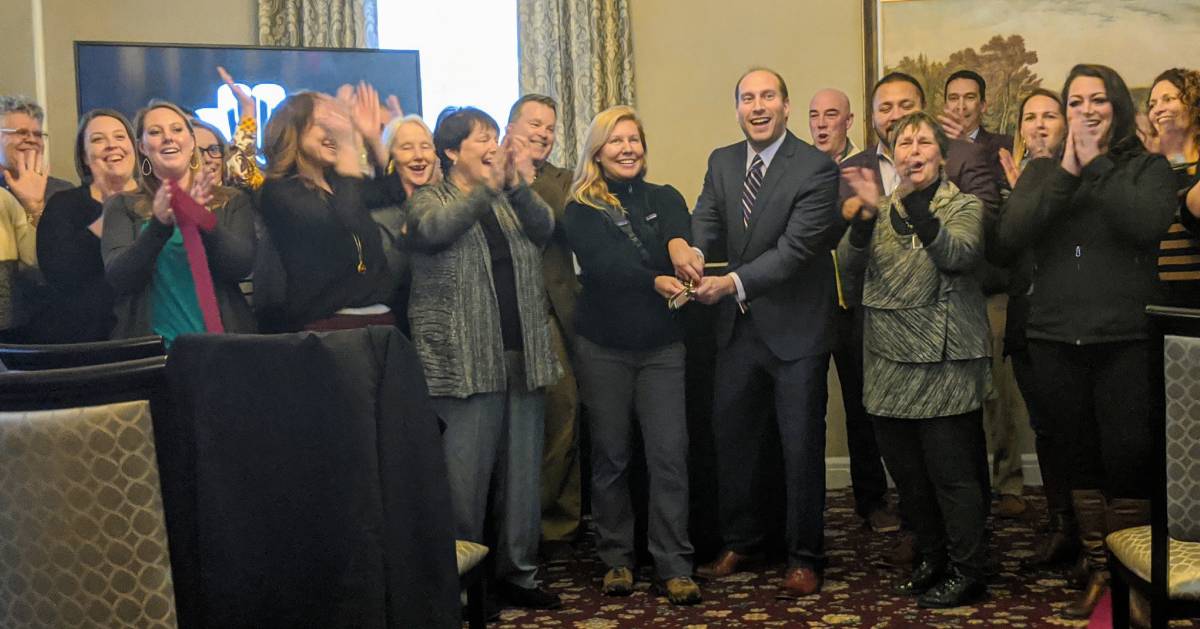 But the enthusiastic crowd was more than thrilled about everything new and exciting at ATF. Here’s the latest:

The New Logo: Crisp, Clear & To the Point

The 2020 ATF Season Announcement took place on January 27th in the Warren Room at The Queensbury Hotel. Rabinovitz presented the latest updates from ATF first, and then unveiled the summer season lineup.

First up, a new logo! ATF is largely known by the acronym and the redesigned logo emphasizes this. “We wanted ‘ATF’ to be seen clearly from a mile away,” Rabinovitz said.

The Producers Circle: A New Way to Fundraise

About 40% of ATF’s income comes from ticket sales. Donations and grants make up the other 60%. With this in mind, ATF came up with the Producers Circle. If you donate $500 or more annually to ATF you can get in this special group which gives members cool perks like access to meet and greets and they’re the first to know about season announcements.

The Loop Project Makes Theater More Accessible to Everyone

Rabinovitz excitedly spoke about the new wireless Loop Project at the Charles R. Wood Theater. Audience members with hearing devices are able to tune in to the theater’s loop system for clear sound. If you do not have a hearing device, you can still utilize the system with personal headphones.

The Lobby Renovation: Reflects the Quality of What You See on Stage 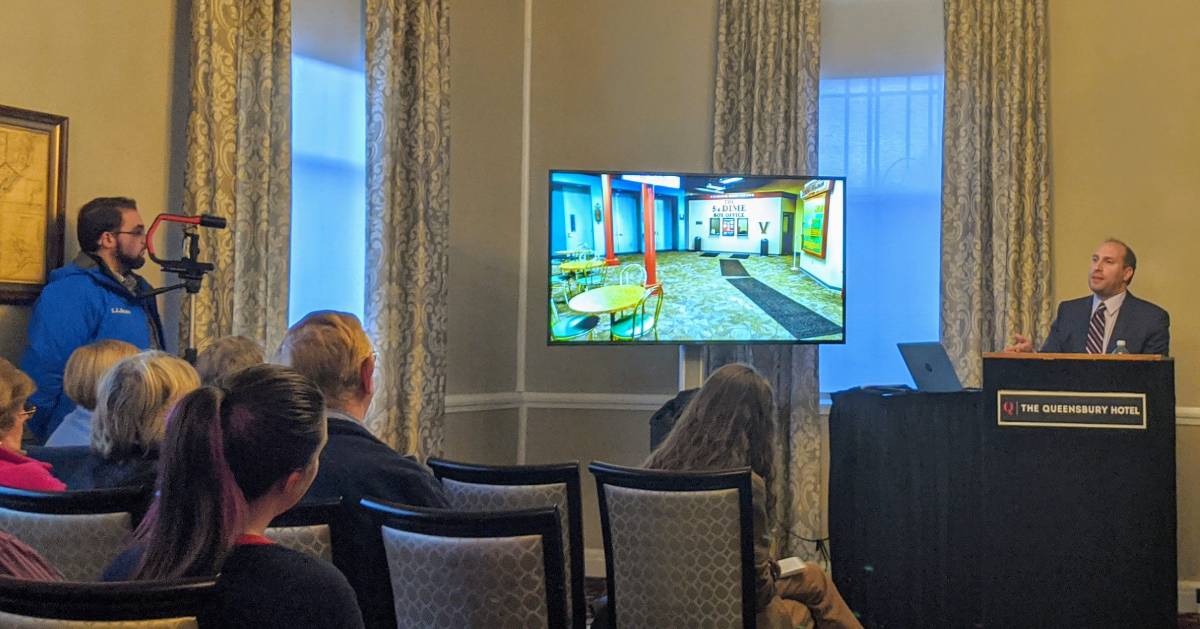 A new lobby renovation has been made possible by a joint grant with ATF and the Charles R. Wood Theater. There’s a new grand entrance, new lighting, new floors, a donor wall that can be expanded, and the cabaret is now its own theater instead of a separate space.

You can support ATF now through January 31st by bidding on items at their live auction. All winning bids support the 2020 season. They’re auctioning off a dinner cruise with the Lake George Steamboat Company, a foursome of golf at The Sagamore, and more.

Check out the auction and start bidding >>

Speaking of fundraising and supporting the theater, ATF has a unique new event happening on April 2nd, a Bartender Battle. There will be 16 teams of 4 battling for the trophy and those who get the most tips win. This will take place at four or five bars on Glen Street with rotating bartenders/teams, finger food, and entertainment.

“It’s like a walkathon except you’re drinking,” Rabinovitz said. Stay tuned for more info on this event as details are ironed out.

2020 Season Lineup: Arguably the Best Yet 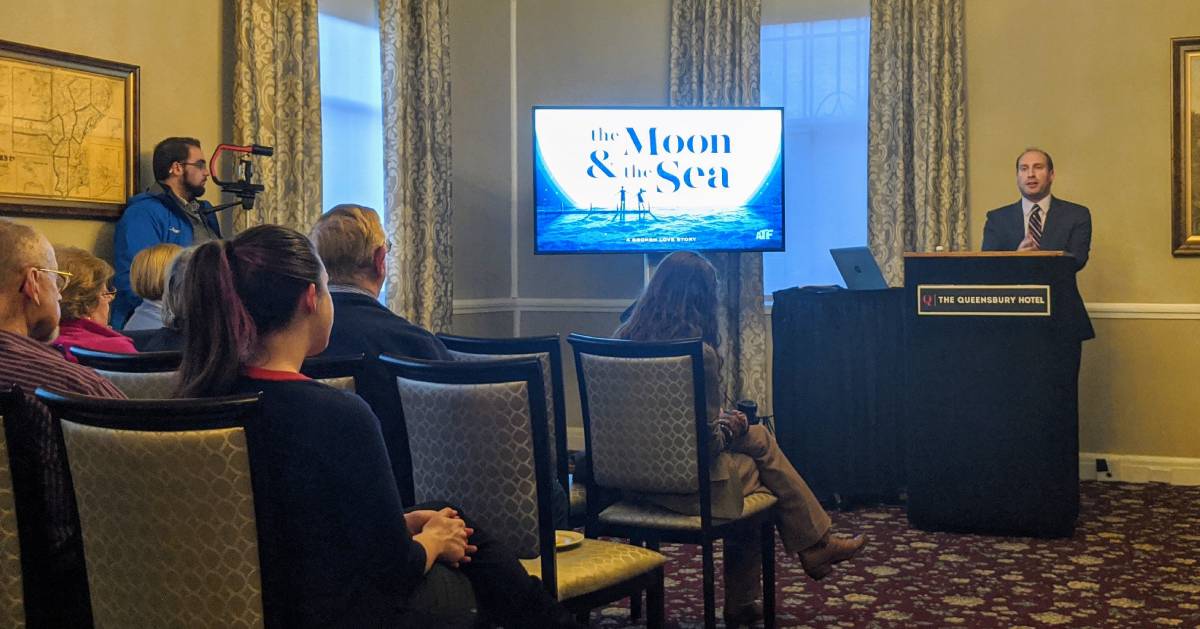 Finally, the 26th season of ATF was revealed. Here’s what we can look forward to:

The Moon and The Sea is described as a “broken love story” and it’s brought to us by Douglas Lyons, the creator behind last season’s popular Beau.

The PB&J Cafe is one of only two children’s theaters in the world that allows kids to experience theater the way that adults do. The young theater dine while watching a full performance and then they get to chat with the actors and get autographs after the show.

This comedy by Greg Kalleres channels the likes of Seinfeld, Friends, and When Harry Met Sally.

If you enjoy Pen & Teller or Whose Line Is It Anyway, you’ll love this competitive magic show where performers do tricks they’ve never done before. This one is currently being optioned for television, so those who attend this ATF production can say they saw it in person first!

Eastbound is a musical drama that follows brothers on opposite ends of the world. It’s written by Cheeyang Ng and Khiyon Hursey and features Mandarin pop music.

Ted Talk meets stand up comedy in Rap Guide to Culture. Rabinovitz encourages audiences to “take a risk” with this one, even if they don’t think they like rap. The show stars Baba Brinkman, a rapper and playwright known for combining hip hop music with science, theater, and literature.

Matt Rodin, who played Ace in Beau last year, brings us original music with this show. Rodin recently starred in Hedwig and the Angry Inch at the Milwaukee Repertory Theater.

From the writers of Front Page Flo, Tuning In covers a retirement community with a radio station that is in danger of being turned into condos. A radiothon takes place to save the station and their homes. The cast for this one is a whopping 13 actors with a band of 10 – the largest cast ATF has ever had in a show.

Subscriptions to ATF are on sale at their website now. Individual tickets should go on sale in the near future (in 2019 they went on sale in early April). Keep an eye on ATF’s website and Facebook, and here on GlensFalls.com, for more information as it becomes available. In the meantime, see what’s coming up at the Charles R. Wood Theater at the link below: