Founded in 1772 as Charlotte County, Washington County, NY is home to many communities that shaped the region's rich history and culture. Today, local museums and historic sites preserve and highlight the county's past. For a unique adventure with the family, drive east of Glens Falls and forge a path through the history of Washington County.

Discover Where the Wild Things Are 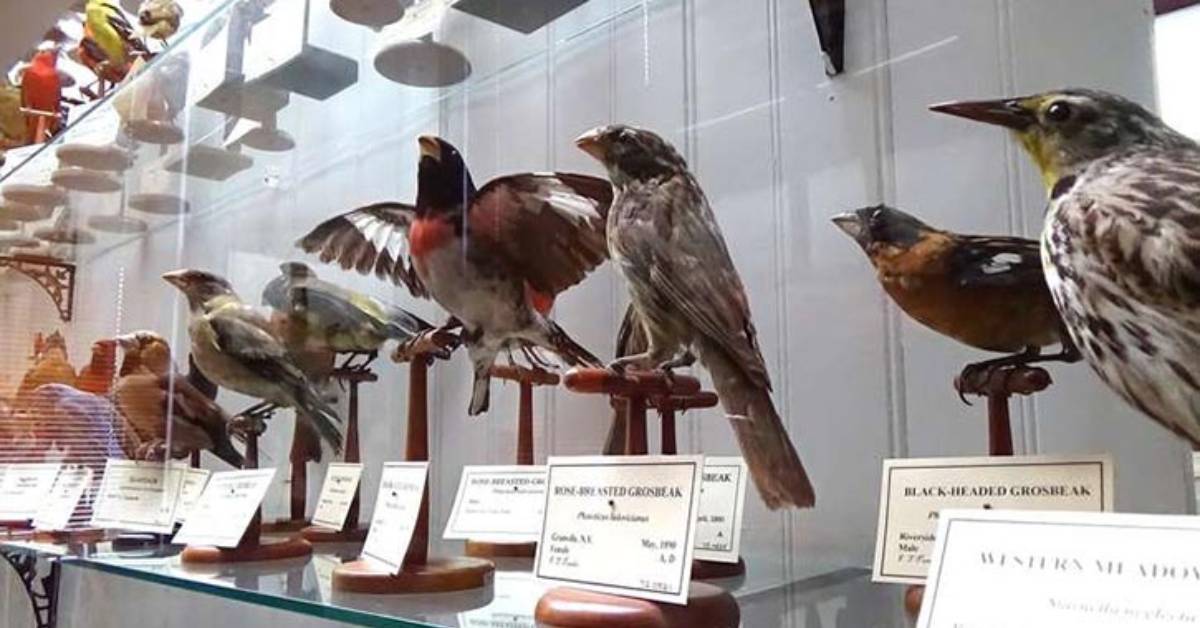 In addition, the Pember Nature Preserve remains open year round from dawn to dusk with free admission. Limited programs are being offered at the museum and nature preserve.

Nature is both strange and beautiful, and it’s also an extremely fascinating subject to learn about. In Granville, the Pember Library and Museum houses one of New York State's largest natural history collections with over 7,000 specimens, many of which are on display.

Granville native Franklin Pember and his wife Ellen Wood Pember established the Pember Library and Museum in 1909. Franklin Pember was an avid collector of natural history and cultural objects from the area and around the world, and his personal collection became the basis for the present day exhibits.

When you visit the Pember, you can see everything from vertebrate (birds, mammals, and reptiles) and invertebrate animals (insects, arachnids, etc.) to rocks and minerals, fossils, and dried plants. There are native animals, rare and exotic mammals, and skulls and pelts.

Best of all, the Pember offers programs and activities year-round, and visitors are welcome to explore the nearby Pember Nature Preserve for an outdoor adventure among local wildlife.

Visit the Colored Slate Capital of the World 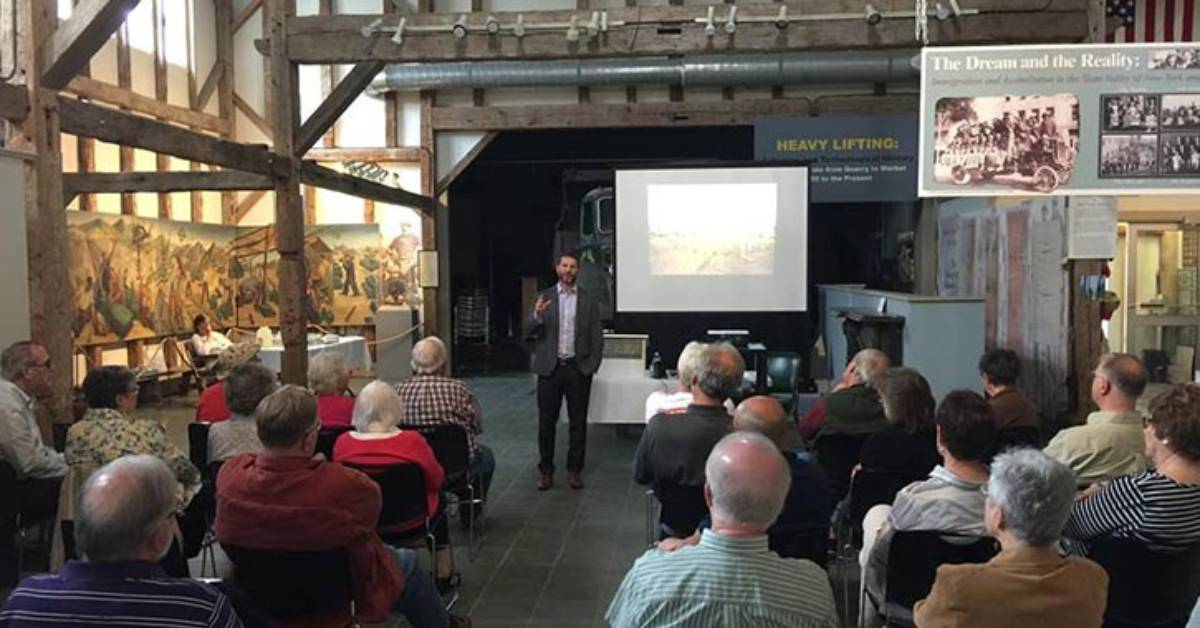 Many know Granville as the Colored Slate Capital of the World thanks to its unique quarries that produce stone in multiple colors, such as purple, green, gray, and red. The quarrying community was built on the foundation of the local slate industry, a history that the Slate Valley Museum celebrates.

This museum's mission is to collect, conserve, and exhibit the history of slate quarrying and the role it played in the Granville area, nicknamed Slate Valley. There are historic objects from old slate mills, interpretive displays, a quarry shanty complete with tools and machinery, and more.

To get the full experience, you can attend some of their exciting programs and special events that are held throughout the year. From hands-on activities to reenactments, stop by the Slate Valley Museum for educational and family-friendly fun! 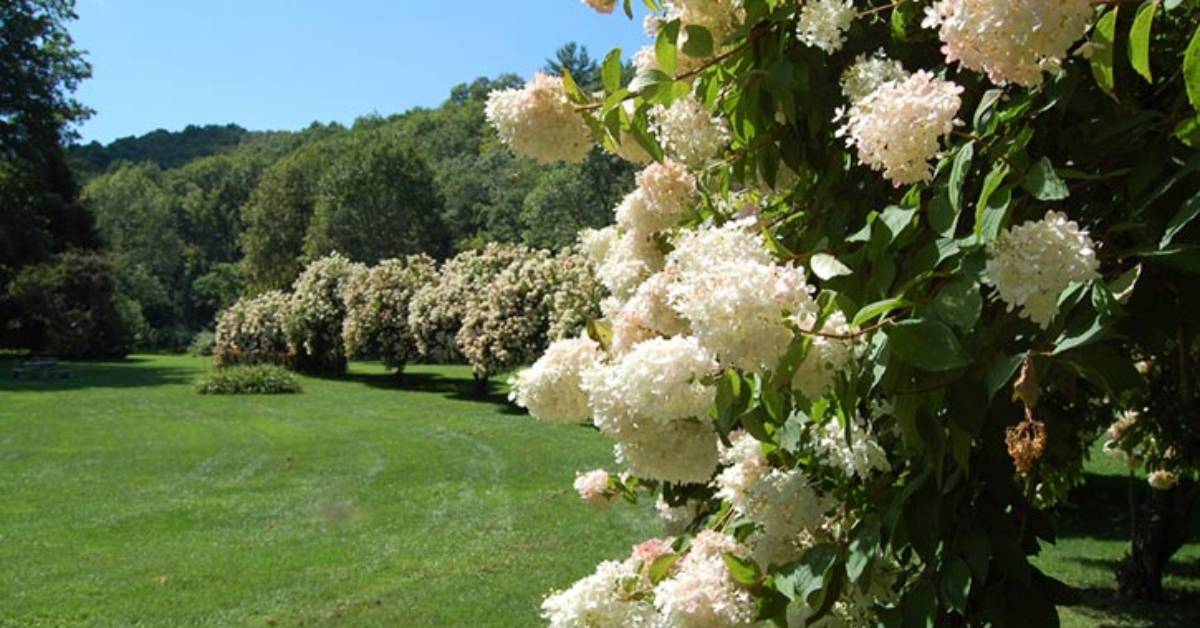 The Georgi on the Battenkill in Shushan is located just west of Vermont and features a unique collection of historic items in its museum. Owned and operated by the Town of Salem, the Georgi Museum studies, conserves, and displays objects from the Georgi Collection, which includes gems and minerals, medieval panel paintings, and much more.

After you explore the museum, take a walk through the on-site Community Park, which has 60+ year-old hydrangea trees and beautiful gardens. Pets must be leashed.

Take a Trip Along a Historic Waterway

The Glens Falls Region's Feeder Canal was built in the early 19th century as a transportation route for canal boats to the historic Champlain Canal near Fort Edward and Whitehall. From the Feeder Dam and Hudson River in Queensbury, the canal traveled east through Glens Falls and Hudson Falls for about 7 miles until it joined up with the Champlain Canal.

In 1832, multiple locks were added to the Feeder Canal, and the waterway was widened to accommodate increased boat traffic. Although the transportation of goods is no longer its main purpose, the canal and its towpath are open for public recreational activities today.

While some walk/bike/run along the 9-mile towpath, others travel along the canal by kayak or canoe, giving them a similar experience as those who originally used it.

Stop by the Spiritual Home of the U.S. Army Rangers 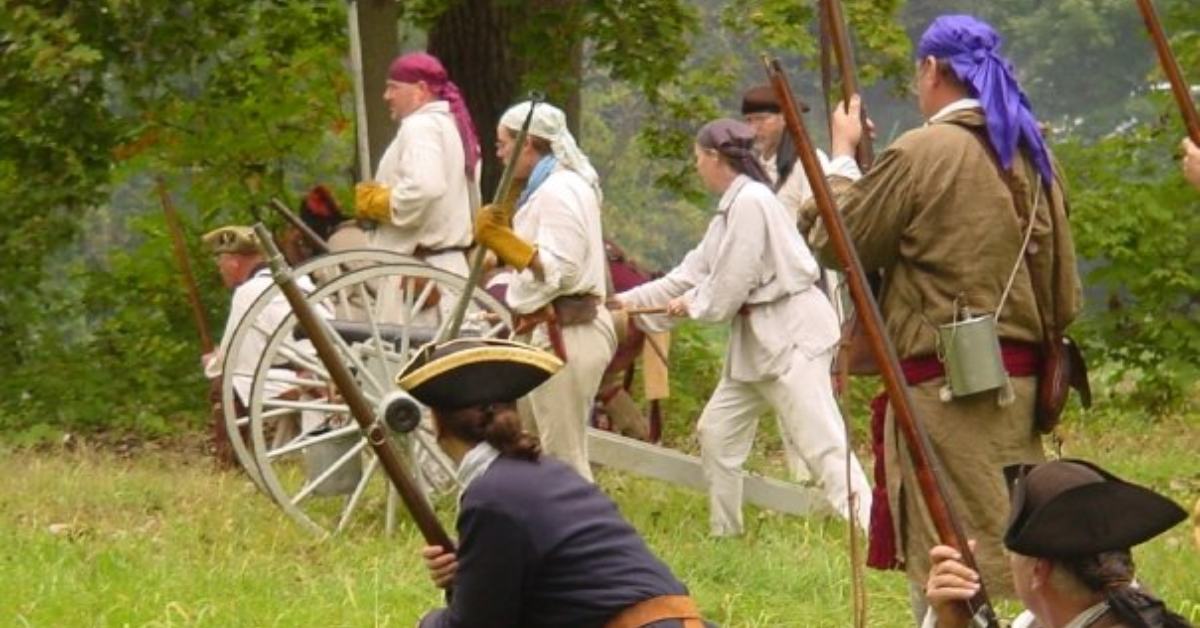 During the French and Indian War, Fort Edward was one of the British army’s most prominent strongholds. The community was once the third largest “city” in colonial America and featured an army base of operations on Rogers Island.

Of particular note, Major Robert Rogers, a colonial frontiersman in the British army, developed and trained a special forces group called Rogers’ Rangers that employed frontier warfare and unconventional tactics in the war. Rogers would write a Ranging Rules handbook that the present day U.S. Army Rangers still use.

To preserve the history of this community, the Rogers Island Visitors Center in Fort Edward features artifacts and displays that tell the story of the region's early Native American inhabitants and the town's military role in the French and Indian War. If you visit during select dates in September, you can typically expect to see the annual French & Indian War Encampment and reenactors, pictured above. 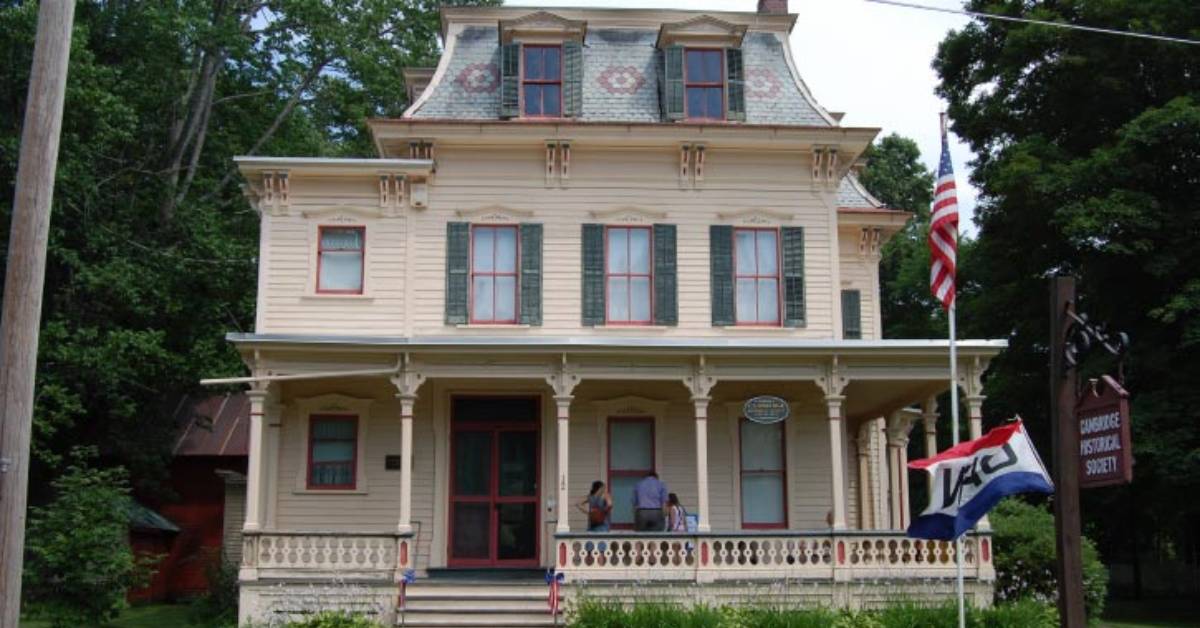 Step back in time at the Cambridge Historical Society & Museum in Cambridge. The museum is located inside an 1869 house built by John Smith, an officer of the Cambridge Valley Bank, and it stands today as an example of period architecture. It features a mansard roof, a wrap around veranda, and a front door with leaded glass windows.

The Cambridge Historical Society manages the house as a museum, and the organization is dedicated to preserving the site and its historic displays.

When you walk through the former house, you’ll find rooms that are filled with 19th century Cambridge-made Barton Furniture, Revolutionary and Civil War memorabilia, 19th century textiles and clothing, and decorated bedrooms that give a glimpse of the way things were.

Travel Back in Time to Fort Edward's Colonial Period 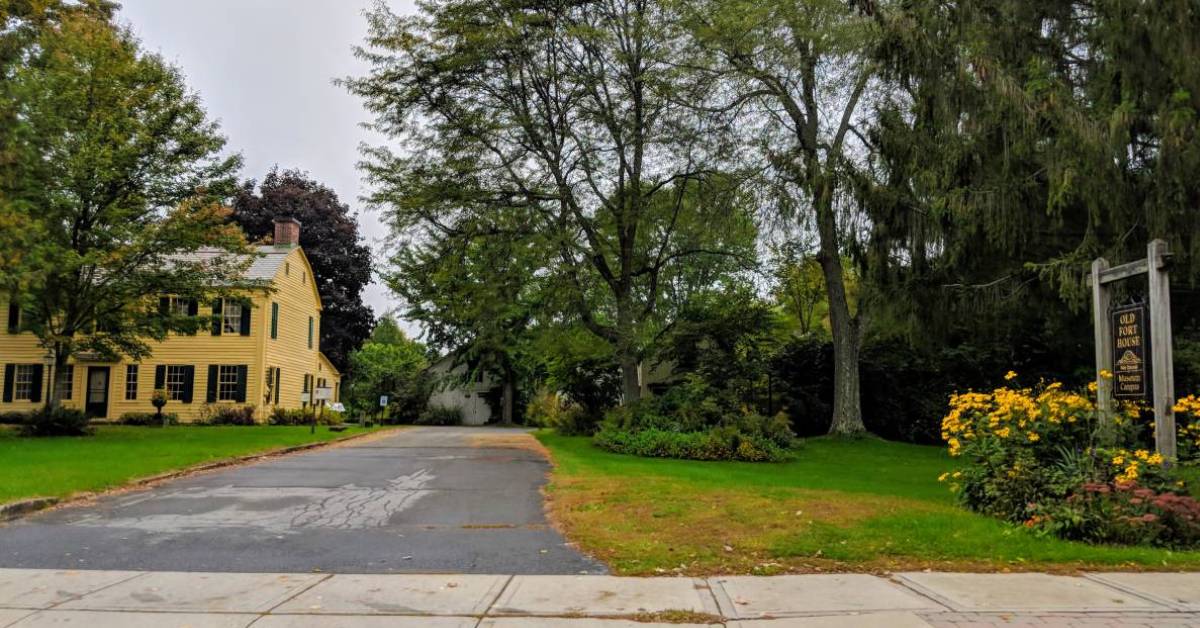 Editor's Note (10/16/2020 8:00AM): The Old Fort House Museum is open seasonally from June - mid October. They are asking visitors to practice social distancing, wear a face covering, and wash/sanitize their hands before entering the museum. For more information, call 518-747-9600.

Explore multiple historic buildings in one location when you visit the Old Fort House Museum in Fort Edward. This building complex features everything from an old 1772 home to an original 1848 toll house, a garden, and more.

There are also some major exhibits on display. The Old Fort House Museum includes a permanent exhibit about Solomon Northrup, who once lived there when the Old Fort House was a boarding house. 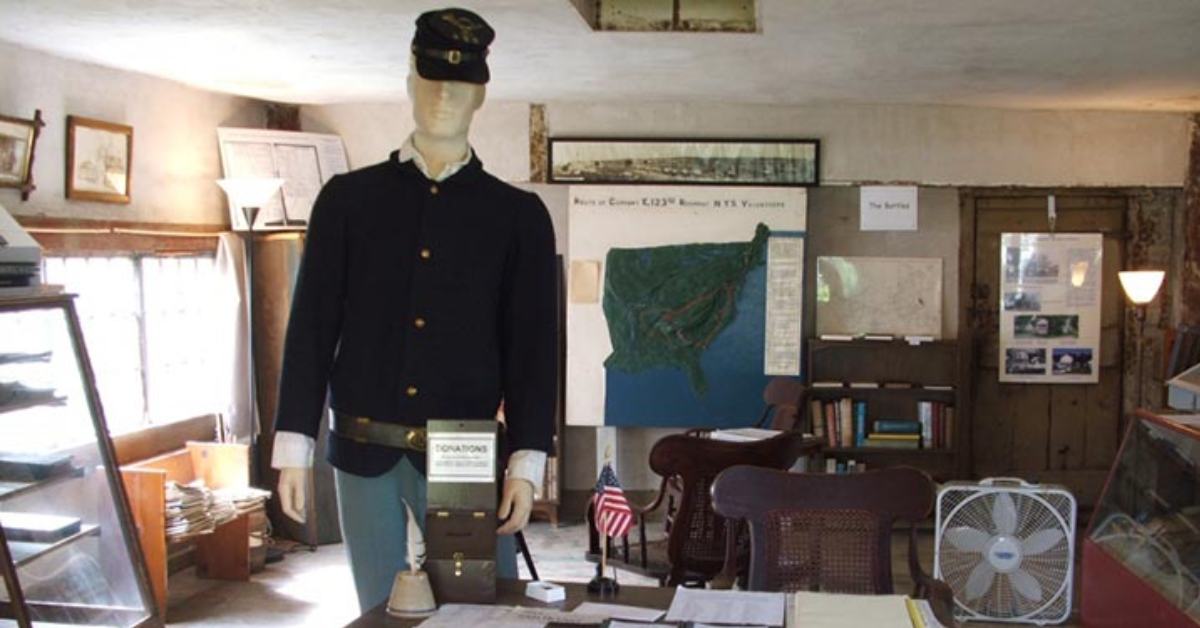 You might be surprised to hear that New York State's last remaining Civil War Enlistment Center is located in Hartford, but it's true!

The Howard Hanna Memorial Civil War Enlistment Center is part of the Hartford Museum property, and it highlights the 3,000-mile journey of the 123rd Regiment of Company E NYS Volunteers as they traveled from Hartford to take part in the Battle of Gettysburg. The center's collection brings to light the stories of these soldiers and their equipment.

While you’re there, be sure to visit the neighboring Hartford Museum, which is reported to be the oldest house in Hartford! Managed by the Hartford Historical Group, this museum features a variety of exhibits on the development of industry and colonial life in the area.

Business Info: The museum and enlistment center are open on Sunday afternoons from 1:00pm-4:00pm in both July and August, and they are also open by appointment. For more information, call 518-632-9151.

Learn about some of Glens Falls' most historic buildings »

« Back to the Glens Falls History Guide