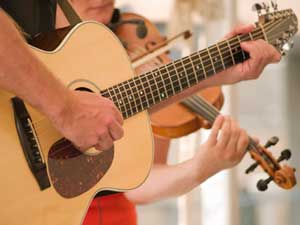 The Folklife Center at Crandall Public Library will be putting on free Folklife concerts every Thursday evening in March and April. The concerts are part of a Folklife Series which the library is hosting and everyone is welcome!

The folk concerts are held in the Community Room, downstairs off the new Glen Street enterance. Doors open at 6:30 p.m. and performances begin at 7:00 p.m.

The concert performers and schedule is as follows:

This five-man group has been together for 15 years, playing original music with a combination of country and blues. They have expanded their group to not only guitar and harmonica, but also fiddle, bass, drums and more for a moving performance.

A truly authentic blues band, they capture the raw excitement of the early blues legends from the 1950's and 60's.

Mike & Rick, from Hair of the Dog

The leads of the Celtic folk-rock band, Hair of the Dog, come to put on a high-energy performance called "a regional music treasure" by the Daily Freeman.

Hungry Town performs brand-new folk ballads and brings an old-fashioned sound that comes right out of the 30's.

A fantastic performance consisting of original music from Bread & Bones with a strong, traditional folk roots.

For more information about the Folklife Concert Series, call Todd DeGarmo, Director of the Folklife Center at (518) 792-6508 x237 or email degarmo@crandalllibrary.org