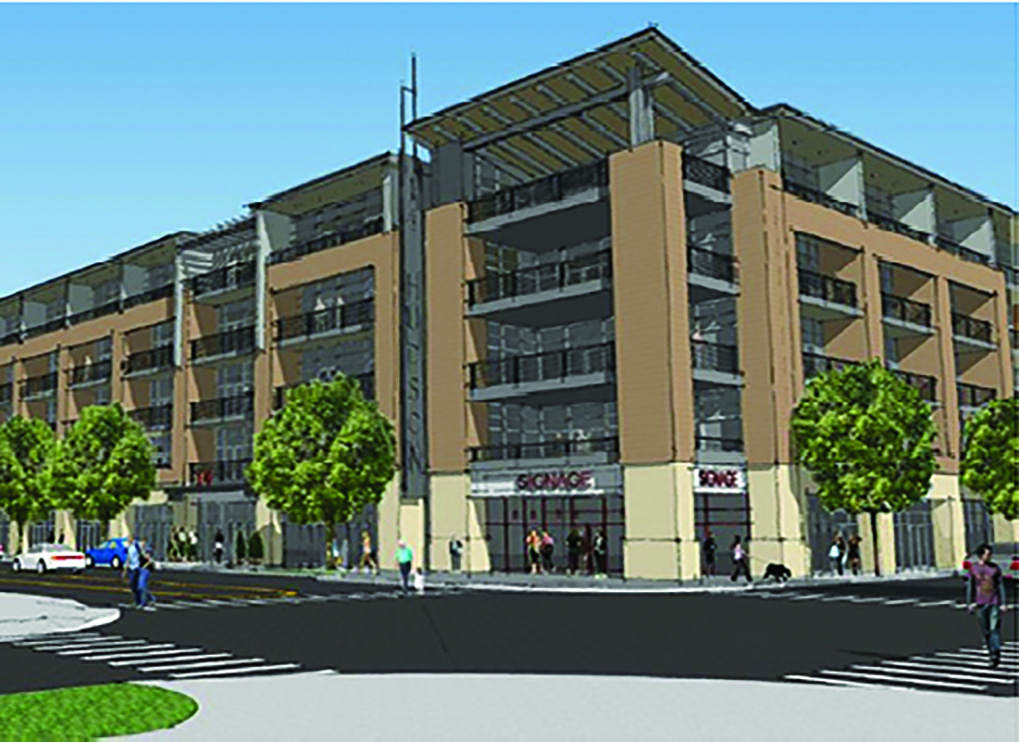 This rendition shows what the new building at 14 Hudson St. in downtown Glens Falls will look like. With retail space and apartments, it is lauded by officials as an economic development success.

Economic development in Warren and Washington counties showed steady growth in 2015, and officials are optimistic for an even better year in 2016.

Edward Bartholomew, president and CEO of Warren County EDC, said there are signs of a spirit of renewed growth in the region. He cited projects at Finch Paper and the continued expansion of the healthcare and medical services segments as indicators of that growth trend.

One of Warren County’s main economic drivers is the medical services industry, he said, and the collaborative relationship between Glens Falls Hospital and Hudson Headwaters Health Network–two of the county’s biggest employers–was highlighted at the EDC’s recent annual luncheon.

In 2015, the Glens Falls Civic Development Corp. also approved a modernization and refinancing project for Glens Falls Hospital totaling $72 million. Of that money, $19 million will go toward the modernization.

Hudson Headwaters opened an expanded facility on Main Street in Warrensburg and expanded the Queensbury Health Center on Corinth Road, resulting in a total of 165 new jobs.

Bartholomew said he is excited about the newer industries that have taken root in Warren County. One of them, Etain LLC, is one of the five organizations in the state approved to operate a medical marijuana facility, which they opened in Chestertown.

Another new company, JUST Beverages, reached an agreement with the city of Glens Falls to access spring water and convert an old church into a bottling plant for its product.

These two new companies added a total of approximately 50 jobs to the area.

Other projects in the area included a 7,000-square-foot addition at Precision Extrusion in the Glens Falls Tech Par; a new municipal parking garage adjacent to the Glens Falls Hospital; and a seven-story mixed-use building, being constructed by Bonacio Construction and the Galesi Group, at 14 Hudson Ave. in downtown Glens Falls that will provide new apartment, retail, and office space.
Bartholomew said the paper industry continues to be an engine of economic growth in the region. He said he is pleased about Finch Paper’s planned $20 million modernization program. He noted that Finch is one of just a handful of integrated paper mills in the country and the project will mean more jobs and greater productivity.

Because the skill level of workers in the area is a key element in attracting commerce to the region, continued growth in education remains a high priority, he said.

In 2016, SUNY Adirondack used a $9.7 million state grant for construction of the Adirondack Regional Workforce Readiness Center. According to the Warren County EDC it will “work with local employers to train students to meet regional workforce development needs and help residents secure employment in the region.”

Hospitality and tourism are of major year round importance to the region. The region has felt a positive economic impact from organizations such as the Hyde Collection, the Children’s Museum, the Wood Theater, the Glens Falls Civic Center, and the Lake George Festival Grounds, Bartholomew said.

Bartholomew said there are challenges in attracting new businesses to the area.

“Ten years ago, site locators would pick up the phone,” said Bartholomew. Today, the website is the primary information resource and site locators are very closed mouthed about the companies they are representing.

Bartholomew stressed that they continually reach out to businesses that may compliment the industries in the area and the EDC works with local municipalities, as well as private business owners, to develop new relationships.

One of the key assets Bartholomew sees as a draw to the area is the high level of skill and workmanship that businesses can expect. This is particularly appealing to the medical equipment industry, as evidenced by companies with manufacturing facilities in the area, such as AngioDynamics, CR Bard, Precision Extrusion and Bates Medical.

One of the top priorities for Warren County in 2016 is the expansion of Broadband to areas of the region that are currently underserved. The EDC is working with state and federal agencies to accomplish this goal.

“The challenge is in getting the necessary funding,” said Bartholomew.

Her agency was formed 31 years ago by a Community Development Block Grant. The agency took that money and issued loans over the years to companies looking to start or expand. When the loans are repaid with interest, the money is turned over and re-used for other loans and projects.

Derway said 2014 and 2015 were outstanding, and the first three months of 2016 are already looking good. Last year was the best year for WCLDC, with the agency reviewing 14 loan applications and approving nine of them for more than $1 million. So far this year, five loan applications are under review.

She said in order to be eligible for WCLDC loans, a business must first have been turned down by a conventional bank.

The challenges faced by her agency include taking a good hard look at the applications to help ensure that a project gets to fruition so WCLDC doesn’t have to write off a bad loan.

Counties like Warren and Saratoga are known for bigger development projects, but Derway said because of the small-town, rural nature of Washington County “it’s very interesting, the types of ideas and projects that come through our office.”

She noted that Whitehall had some business closings over the last year or so, but Greenwich is showing continued growth.

“We’re a stable county,” said Laura Oswald, economic development director for Washington County. “We’re not seeing tremendous changes in terms of new projects,” but there are no huge losses, aside from General Electric closing shop. Even that, she noted, was known for a long time, so people were able to adapt.

Like Bartholomew, one of the key issues she views is the expansion of broadband internet access and she has been working with state officials to get funding for improvements in that realm. The increased broadband will have a huge positive impact for existing business, as well as for business recruitment.

“Most people tend to think of economic development as the Global Foundries of the world,” said Oswald. But the reality is more small projects and small successes.

“It takes significant outreach and effort” to get economic development results, she said.