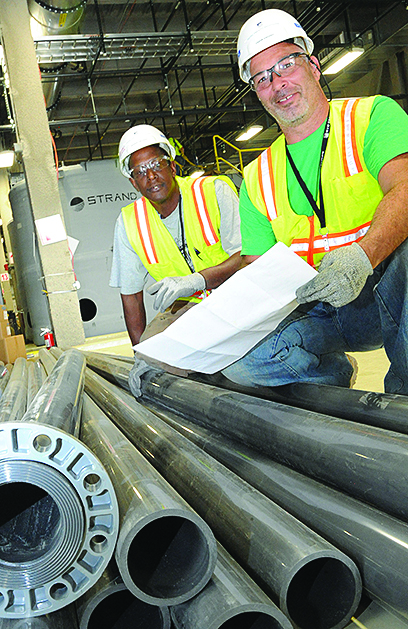 Members of Plumbers and Steamfitters Local 773 are finding more work in the area.

After nearly three years of anticipation, local union officials say the economy upstate may be on the verge of a healthy growth spurt.

Recent years have been slow for the building trades. But technology firms throughout the Capital District and parts north have played a big part in projected business growth, said Scott B. Martel, business manager of the U.S. Association of Plumbers and Steamfitters Local 773.

“As tech firms expand, more businesses come to the area to supply what those firms need,” Martel said, furthering the demand for qualified tradesmen across the commercial building industry. Lately most contracts for Local 773 have been in the public works sector, he said.

From September 2015 through April 2016, 90 apprentice plumbers and steamfitters took part in a training school, meeting for three hours, three times a week, following a full work day, Martel said. The apprentice program lasts five years, but even the most experienced journeymen continue classroom training and practical experience to keep up their skills.

The school, in South Glens Falls, offers some specialized instruction for plumbers working at tech manufacturers like GlobalFoundries, said Martel.
“Piping system standards are quite different for a high-purity environment than for a school or library or commercial project,” he said. “Local 773 keeps all its members up to speed. New technology requires that.”

Mark Lajeunesse also expects work to pick up for his union. He is business manager for IBEW Local 236 which represents workers in the Saratoga region.

“Contracts were slow starting out the year, but things are improving,” said Lajeunesse. “Things could always be better, but there is an ongoing need for organized labor and skilled electricians.”

“We run the whole gamut from private individuals, to industrial needs like the Saratoga Springs casino and convention center, to a cement plant in Ravina,” he said.

Membership today is 1,600 covering 13 counties from the Catskills to south of Ticonderoga and from Utica to the borders of Vermont and Massachusetts.

And there is always a supply of candidates among high school graduates, the military and local colleges turning out electrical construction degrees to fill Local 236’s apprentice programs.

“We interview 500 to 600 applicants each year,” Lajeunesse said. “Depending on our outlook we will accept an appropriate amount.”

The five-year apprentice program is run by IBEW workers and overseen by the state Department of Labor.

“The curriculum teaches OSHA 10, OSHA 30 and MSHA for apprentices and journeymen, including low voltage, instrumentation, and tele-data training.

“We keep our members on the cutting edge,” he said.

Both Martel and Lajeunesse have had long careers with their respective unions and are loyal despite some negative perceptions about organized labor.

“We do things the right way, constantly training and offering people a career,” said Martel. “If some have negative attitude it is because they are not informed about what we do.”

“Overall, big picture, we make ourselves available, getting jobs done on time and under budget,” Lajeunesse said.