People in the building and trades industry—union leaders, business owners and educators—continue to say there is an ongoing need to recruit new people for the welding, HVAC, building construction, plumbing, electrical and other trades.

“It’s been a challenge for the last 15-20 years getting plumbers, roofers, framers. We’ve noticed in our own company there are way too many people who are in their 40s and 50s and not enough in the 20- and 30-year-old range,” said Bonacio.

“We are trying all the time to become more involved in BOCES and two-year community colleges. There’s a large demand, steady work and good benefits. We’re trying to get over a perception hurdle. A lot of kids getting out of high school and going through college believe they’re going to get a great job, maybe designing a video game in a cozy office,” he added.

Bonacio pointed to the high number of graduates plagued with large student debt that are not finding the kind of jobs they were hoping to find. “I can’t tell you how many kids come to us who have buried $300,000 or more into their education.”

He said in the building trades, not only is there a lot of work, but it can be very rewarding and challenging. “The stereotype of wearing a tool belt and not having a rewarding career is just not true.”

While Bonacio does have some female project managers, having women in the industry “is not the norm.”

B.J. Kozlowski, partner with B&B Plumbing & Heating, said he made a decision while in high school to pursue building trades. He currently oversees the HVAC division at B&B.

Holly McArthur, guidance coordinator at Warren, Saratoga, Washington, Hamilton, Essex BOCES (WSWHE BOCES), said they recently expanded the high school-level construction trades program to a full-time program because of the need, but also because of the interest.

She said more high school students may be paying attention to the call for skilled labor and are making the decision to opt for internship programs at community colleges, or apprenticeships with construction companies and labor unions, rather than take on the burden of college debt.

Previously, BOCES operated one program in the afternoon; but starting in the fall of 2018, they will have both morning and afternoon sessions dedicated to the building trades.

“We’ve had a waiting list, which is good news,” said McArthur.

There are approximately 20 students per session, which has gone up, according to McArthur. Classes are offered in HVAC and refrigeration, heavy equipment maintenance and operation, welding and auto technology. BOCES offers internships to students in their senior year, connecting them with employers.

“Some get hired right after their internships and there are a wide range of starting salaries,” she said.

Tony Bianchini, director of communication for Northeast Regional Council of Carpenters, Carpenters Local 291, which has 13 local offices between Albany and Plattsburgh said the organization is opening a new training center in Albany at Corporate Circle.

“We try to get parents and guidance counselors to talk to kids who are good with their hands. This is a good career with great wages and full health care, pension and retirement. There’s no other industries where that’s even offered any more,” he said.

Bianchini said that students come into Local 291 as part of a five-year apprenticeship program, where they learn in class and also in the field as journeymen.

“They earn while they learn and they’re getting all the skills to be safe and build projects the right way, the first time,” he said. “We are trying to get anyone who wants to be carpenter, dock builder, mill cabinet worker. We have 38,000 members and we are in all of New York state, except New York City, as well as New Jersey, Delaware, Philadelphia and four or five counties in Maryland.” 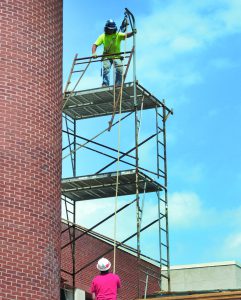 “I’ve always worked for labor organizations,” he said. “It’s a noble cause and not enough people know, or they’ve forgotten, why unions are important. Ours has been around for 135 years and our founder pushed for 8-hour work days. We fight for all workers’ rights and we care about putting money in their pockets.”

He said the Albany location is going into its second year of offering six-week, pre-apprenticeships to women interested in exploring careers in the trades industry. If they pass after six weeks, they are eligible to go into an apprenticeship program.

“Jobs don’t have a gender,” he added.  “We just had a conference with 300 women carpenters in April. Our goal is to raise the number of women from 2 to 10 percent. In New Jersey, it’s up to 9 percent already.”

Another union working hard to get more people into the skilled trades is Plumbers and Steamfitters Local 773, at 37 Luzerne Road in Queensbury. The union has a $5 million, 18,000-square-foot training facility where apprenticeships are offered to dozens of newcomers every year. With 350 active members, it invests about $250,000 a year on training.

Nelson Charron, Local 733 organizer, said while it can be a challenge finding skilled workers to fill the growing number of jobs available, they are always working with high schools, BOCES programs and community colleges to get people interested in welding, HVAC and refrigeration careers.