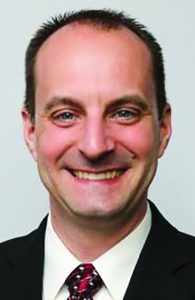 The Adirondack Regional Chamber of Commerce (ARCC) announced that Eric Gilbert, is serving the last year of his two-year term as chair of the board of directors of the organization in 2020.
Gilbert has been a member of the board since 2013.
The ARCC also recognized Tim Jansen, of Wel-Dun Air & Water Systems, as the immediate past chair of the board.
“Our community is so blessed to have volunteer leaders like Eric Gilbert and Tim Jansen. Tim has put his heart and soul into the ARCC. Eric has certainly carried on his legacy,” said ARCC President/CEO Michael Bittel.
The Chamber announced five new board members in 2020, including:
• Damian D’Angelico, Director of Sales & Marketing, at Fitzgerald Bros. He began his career in the beverage distribution industry in a warehouse role, then moved onto a route driver role. He joined Fitzgerald Bros. in 1994 as a salesman and moved into a management role years later.
• Juan Gonzales Jr., chief financial officer for Hunt Companies, Inc. in Argyle. In 2015, he was vital in guiding HCI from the brink of closure after their primary national account unexpectedly stopped all construction projects, according to ARCC. Since that time, he helped the company to a revenue increase of 138 percent.
• Eric Ryan, vice president, relationship manager, commercial banking for TD Bank. He has 18 years of combined experience in consumer and residential mortgage lending, retail banking, small business and commercial finance. In his current role at TD Bank, he delivers business banking and lending solutions that support growth and profitability for business customers in a variety of industries.
• Tim Seeley Jr., president of client relations for Seeley Office Supplies. With over 12 years of experience in the family-run business, he leads the sales team in nurturing existing relationships, developing new ones and expanding territories across the North Country and Capital Region.
• Jen Whalen, treasurer/controller of Rozell Industries, Inc. She has worked at Rozell Industries for the past eight years with the last three as the controller. She received a degree in business administration and an MBA with a certificate in project management from SUNY Empire State.
For a list of all 2020 ARCC officers and board of directors, please visit www.adirondackchamber.org/officers-board.
ARCC serves more than 1,000 members, predominantly in Warren, Washington and northern Saratoga counties. It is a leading advocate for regional businesses on a wide range of public policy issues and provides its members with a wide variety of business education, development and networking programs.