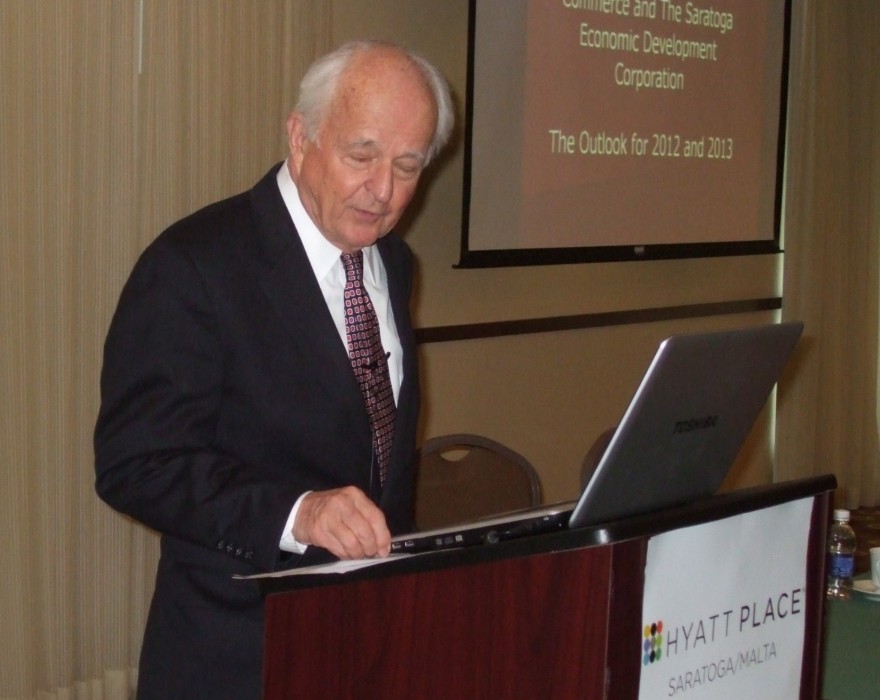 Renowned financial adviser Hugh Johnson recently provided his assessment of today’s global financial conditions and gave his best projections of what that will mean for the U.S. and for our region. Johnson spoke before a group of members of the Chamber of Southern Saratoga County and Saratoga Economic Development Corporation at Hyatt Place in Malta. The event, sponsored by Teal, Becker & Chiaramonte CPAs, was attended by more than 120 people.
As chairman of Hugh Johnson Advisors, he manages nearly a million dollars in investments for individual and institutional clients, and serves as a consultant to $1 billion in institutional assets. He has appeared on ABC, NBC, and CBS television networks as well as PBS’s The News Hours with Jim Lehrer and Nightly Business report. In addition, he is an adviser to the chairman of the NYS Assembly Committee on Ways and Means and an adjunct professor at Rensselaer Polytechnic Institute.

Johnson began his talk with a review of the methodology that he employs to forecast the economy, in order to manage portfolios. He outlined a three-step process. “Step one is to identify meaningful trends that are unfolding in the financial markets,” he said. “The next step is to identify important trends in monetary and economic variables. The purpose of these two steps is to determine if these trends are a rational forecast for the economy and for earnings of companies. The final step, from the point of view of an investor, is to position the portfolio to participate in those trends. The whole purpose is to try to identify where you are in the current cycle.”

Each cycle consists of three parts, Johnson explained: a stock market cycle, followed by a business or economic cycle, followed by an interest-rate cycle. This cycle has recurred regularly in the post-war (and pre-war) period, making it a good bet that it is happening again.

“However, from time to time,” he said, “along comes a mania like the housing mania of 2004 and 2005. The strength and impact of the mania will affect the longevity of the cycle. You may have thought that the housing mania and what followed was unique, but it’s not at all unique. It has recurred with enormous regularity going back to the Tulip Mania of the 17th Century.”

The first stage of a mania is investment, where people buy a house to live in it. That stage is followed by speculation, characterized by euphoria, where investors borrow money to buy a second, third or fourth home, sometimes with the encouragement of a mortgage banker, and sometimes at an inflated price.

The next stage of a mania is the financial distress, which Johnson placed in 2005-2006. Prices stop going up, speculators begin to default, and the lenders begin to back away from the markets. Prices get progressively weaker.

The final stage is revulsion – 2007 and beyond. “This stage is characterized by a veritable race for the exits by the speculators who try to sell those homes at any price, and by the lenders, who are saddled with that debt and would like to sell it.” said Johnson. “It is during the stage of revulsion that we go through the process of trying to eliminate those excesses of the previous stage. The stage also reveals the swindles and scandals that have invariably occurred during the stage of speculation.”

Important trends in the financial markets are a little less ambiguous today than they were in recent months, according to Johnson. Since August 19, the trend in the stock market is up, with the S&P 500 having risen 14.7%. Investors are migrating to the riskier sectors of the market, such as industrials, consumer cyclicals and technology. Small capitalization, higher risk stocks have been outperforming safer, larger capitalization stocks. And long-term interest rates are beginning to increase.

“The message of the market is that we have further to go in the current cycle,” said Johnson. “The Federal Reserve has been accommodative, and even the Central Bank of Europe starting to lean towards less restraint. That’s an important piece of the puzzle.”

“Overall bank lending, particularly to businesses, is starting to improve. The money supply is now positive, growing, and quite strong. There’s enough growth in liquidity to drive the economy and have enough left over to drive the financial markets. Leading indicators for the economy continue to rise. They have risen in 28 of the last 31 months.”

“The growth rate of the U.S. economy is extraordinarily anemic compared to other post-war recoveries. The reason is that we are still in the revulsion stage of the mania. We are still eliminating the excesses of the housing bubble. Individuals are choosing to save or reduce debt rather than to borrow and spend.”

Closer to home, Johnson expects the New York State economy to mirror the national economy – recovering at a rather slow pace. Neither policymakers in Albany nor in Washington will do much to change the outcome, no matter how hard they try. Real changes occur at a more local level.

“Employment performance right here in this region is one of the best in New York State,” said Johnson, “and it should continue to be better than the rest of New York and certainly the country through 2013.” His statistics show 1900 new jobs in 2011, with 1400 expected in 2012 and 1650 more jobs in 2013. Strong growth will continue in our region.

“We have not yet gotten to the end of the current cycle. So, from an investment point of view, you should continue to have a meaningful allocation in equities. That will be the best-performing asset class for 2012 and 2013. In terms of sector performance, you may see technology stocks doing very well, and consumer staples stocks. I have downplayed financial stocks since 2006, but for the first time, I am now starting to look at financials positively.”

Johnson warned that the direction of the European economies could cloud the future of the U.S. economy, as well. The consensus is that it will temper the growth here in the U.S. He further warned, “If you superimpose fiscal restraint, in the form of higher taxes and less government spending – in the name of some ideology that says that deficits and debt are bad under all economic conditions – on economies in recession or which are growing very slowly in the revulsion stage, you’re making a big, big mistake. . . . in a crisis, you cannot hold back. You have to go at it.”

“What we have going for us is that nobody has the guts, in an election year, to make these tax increases and these spending cuts, in my view. So, in time, you’re likely to get higher taxes, less government spending, tax reform and entitlement reform, done intelligently – and it should be done to reduce deficits and debt over a longer period of time – at least we don’t have that danger in 2012,” said Hugh Johnson.

The audience left the Malta Hyatt a little wiser about their financial futures, with the words of Hugh Johnson ringing in their ears. He summed up his outlook, with a grin, by saying he is, “Scared, but optimistic.”