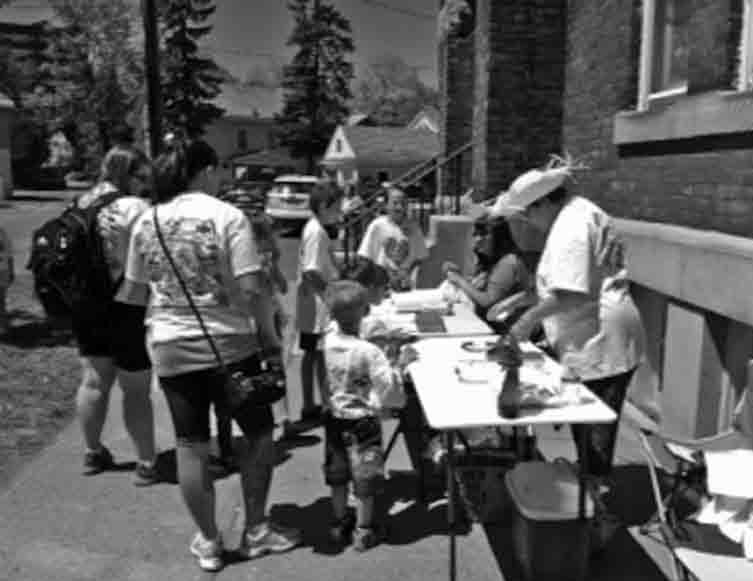 The participants at the annual CROP walk in Hudson Falls were part of the hundreds who helped the 2013 edition become the most successful to date, raising more than $56,000

The Hudson Falls United Methodist
Church, located at 227 Main St., Hudson
Falls, completed its most successful CROP
Walk to date, according to organizers of
the event.

Held on May 5, the walk and festivities
were attended by some 200 supporters,
marking months of fund-raising efforts that
garnered more than $56,000 for local food
pantries, the highest amount raised since
the walk began. In past years, the event
has averaged near $40,000, organizers said.

The event, officially called the Gene Dupell Memorial CROP (Communities Responding to Overcoming Poverty) Walk, is named after one of the event’s top fundraisers, who had participated in it years ago using his wheelchair.

“Gene Dupell proved anyone can contribute and make a difference,” he said. “It’s amazing. We break the goal every year,” said Albrecht. “The event keeps evolving. More people want to be involved. This speaks to the wonderful community we live in. Even in a recession, the spirit of giving is remarkable.”

Starting in January, Albrecht and Washburn host “spirit-led volunteer meetings” every two weeks that are open to all community members. Albrecht said the meetings are attended by about 30 people who then determine how the money should be delineated.

Proceeds from this year’s CROP Walk will benefit the Bread of Life Food Pantry in Hudson Falls, the Fort Edward Food Pantry, the Moreau Community Center, the Open Door Soup Kitchen in Glens Falls, and wherever additional funds are needed.

In addition to coordinating the CROP walk, Albrecht leads his business, and is active in Glens Falls Kiwanis, the Adirondack Regional Chamber of Commerce board of directors, the Home Builders Association, BOCES, and House of Grace, among other organizations.

Albrecht said he manages his various leadership positions by firmly believing people can always make time to give back to their communities.

“I don’t do this to gain business,” he said. “My heart is attached to the CROP walk. The by-product of that is people get to know my character and value system, and we can build trusting relationships and work together.”

Albrecht became involved with the CROP walk in 1999, following a missionary trip to Honduras in which he returned home “looking to make a difference.” He said he secured six corporate sponsors his first year as chairman. Fourteen years later, the 2013 event was supported by a record-breaking 128 businesses.

Washburn credits the success of the event to its visibility. She said 38 banners were displayed throughout the region, and sponsors received tremendous marketing value for the dollars they provided. For the first time, the 2013 event had $1,000 platinum-level sponsorships. Aaron’s Sales & Leasing, Berkshire Farm Center and Services for Youth, Curtis Lumber, Hilltop Construction Co., North East Spray Foam, Parks Heritage Federal Credit Union, and Six Flags Great Escape each participated at this level.

Additionally, continuous fund-raising events sparked interest throughout the community. Money was raised through three dining events at local restaurants. All of proceeds were donated from a breakfast held at Johnny Rockets, and also through a lunch at Outback Steakhouse. A total of 30 percent of proceeds were donated from a dinner at Cooper’s Cave Pub.

Washburn said one of the most heartwarming experiences of the CROP walk is the coin drop, in which volunteers accept spare change from passing drivers. Alone, this event raised nearly $5,000.

“Stories from the coin drop are phenomenal,” said Washburn.”The event touches so many people and donations range from $100 bills to any change a family can scrape up. They drive by and thank us for standing in the road. That’s our fuel. That’s what keeps us going.”

The day of the walk also included a number of family activities such as bounce houses and face painting, along with appearances by WNYT NewsChannel 13 chief meteorologist Bob Kovachick, and Dax of the Adirondack Phantoms.

Albrecht and Washburn will return as co-chairpersons for next year’s CROP walk and plan to “add new events and continue to make the walk bigger and better with each year,” she said. “We think we’re giving a gift. But in so many ways, we’re getting a gift back.”

To learn more about sponsorship or volunteer opportunities with the 2014 CROP Walk, visit the event website at www.genedupellcropwalk.blogspot.com, e-mail Albrecht at alb71275@aol.com, e-mail Washburn at Mikayla2402@msn.com, or call 747-5708.