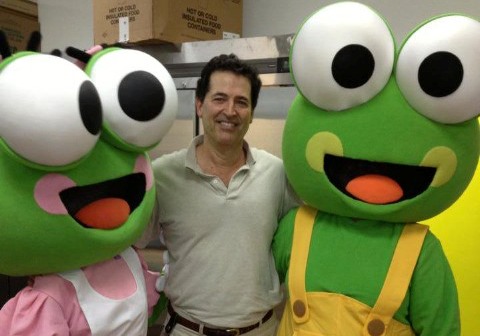 Owner Rich Fulkow, retiring after 28 years
as a physician, was looking around for his
next career when he discovered the Sweet
Frog chain.

Fulkow said he considered opening a franchise
in the New York City metropolitan area,
but then discovered that there was an under
served population of frozen yogurt lovers in
the Adirondacks.
At Sweet Frog, the standby favorites of frozen yogurt are there: vanilla and various berry fl avors. But the self -serve, soft-serve frozen treats are also offered in selections like eggnog, pomegranate, cake batter and root beer fl avors, among others.

No-fat, low-fat, low-sugar, supreme, and sorbet options are available. At 45 cents an ounce for yogurt and toppings combined, one may select a modest-sized treat in a small or medium cup, or a large, all-out indulgence.

Fulkow also plans to open another new Sweet Frog Premium Yogurt shop in Queensbury Plaza should be open. That could happen by February, he said.

Sweet Frog’s parent company was founded in 2009 in Richmond, Va., by Derek Cha. Cha will be a co-franchisee with Fulkow for yet another shop that will be opening in Plattsburgh next year.

To see a complete list of yogurt and topping fl avors, pictures of other Sweet Frog apparel and other accessories gear, visit sweetfrog. com. The phone number at the South Glens Falls Sweet Frog is 480-4401.