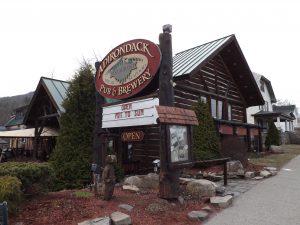 John Carr, owner of Adirondack Brewery and Pub in Lake George, is planning a $5 million project that will expand brewing capacity and add a distillery

Adirondack Brewery and Pub, after more
than a decade in the business, is expanding
and also moving into the distillery business.
Owner John Carr purchased a four-acre lot
on route 9, the former Off-track Betting Corp.
building, to expand about three-fold.

It is located near his existing pub and brewery
at the intersection of Sewell and Canada
streets.
Carr’s expansion will cost about $5 million,
with renovations of the existing 8,000-square foot
building to become High Peaks Distillery.

Carr started Adirondack Brewery and pub in
1999. after graduating from college, he’d spent
a couple of years living and working in Europe.
returning to the United States, he found that
american brews were missing a flavor that he’d
come to enjoy in European beers.
Adirondack Brewery was established with a philosophy of brewing “a clean, drinkable, american-style beer,” he said, a bit “hopforward,” which he defines as having a little more hop presence without being too hoppy.

The brewery and 50-seat pub have done well, but, given the seasonal nature of Lake George restaurant businesses, Carr was considering how to keep his valued staff employed in the winter and help to make his business more year-round.

A friend suggested that he start a distillery. Carr admitted that in producing beers, it had crossed his mind to see what other malt based products he could produce. A distillery made sense.

He said beer is best fresh, so it makes sense to brew more of that closer to the time when more of it will be consumed. Spirits, like bourbon and whiskey, on the other hand, benefit from aging, so it makes sense to keep waitstaff and others employed through the winter producing bourbons and malt whiskeys.

Carr said the distillery will be called High Peaks Distillery and the new product will be marketed with the Cloud Splitter label.

Plans for the overall expansion project involving the pub, brewery, and distillery, include the addition of a 3,000-square-foot space upstairs. It will include a banquet room suitable for rehearsal dinners, meetings, and other events. The banquet room should be ready for use by next winter, said Carr.

There will also be a storage space for barrels and packaging for the brewery. It will be a long-term project, he said, as it will take a few years until the first spirits are out on the market.

Once up and running, Carr anticipates the expansion will mean five to 10 new jobs in marketing, production, bottling, and retail sales. For the moment, however, a completion date on the distillery’s construction, on the site of the former OTB parlor, remains, in Carr’s words, “permit-dependent.”

Given that barley and corn, among other products used in distilling, come from agricultural sources, Carr’s businesses benefit from marketing assistance to New York state brewers and distillers provided by the state Department of Agriculture. Carr said he is most grateful, however, to support from the local community and for the quality of Lake George water, which greatly impacts the taste of his products.

Adirondack Pub’s menus and other information about the pub, brewery, and distillery can be found at adkbrewery.com.

The pub is open weekends year-round and seven days a week from May to October. The phone number for Adirondack Brewery and Pub, 33 Canada St., is 668-0002.