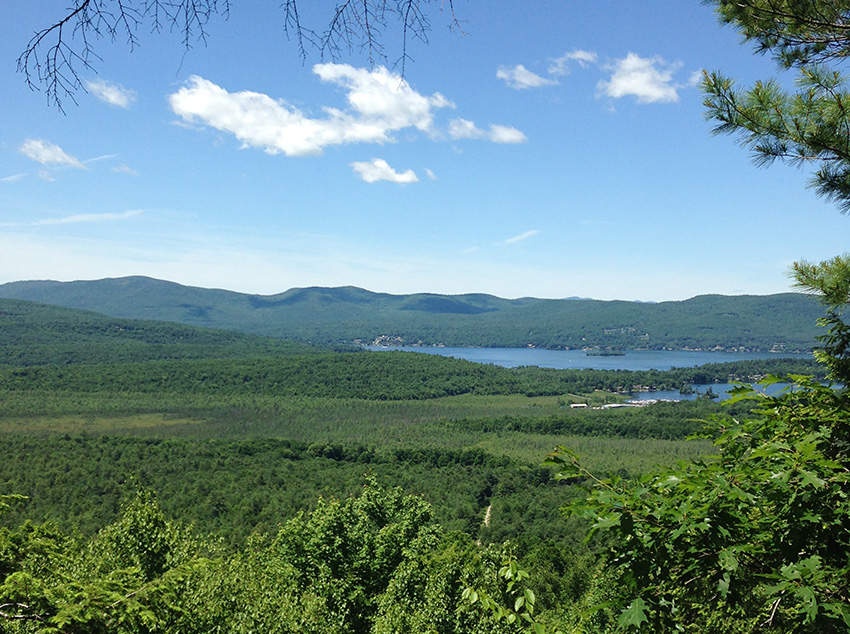 This is view of Dunham’s Bay and French Mountain as seen from the Van Hart property in Fort Anne, donated this year to the Lake George Land Conservancy

The Lake George Land Conservancy
(LGLC) said it has had a banner year so far,
and anticipates more to come before the end
of 2014.

In reporting on activities this year, officials
said that in the past nine months, LGLC has
protected 462 acres of Lake George watershed
lands through partnerships, purchases,
donations and conservation easements, and
is working on plans to protect over 750 acres
in the near future.

Land conservation projects were completed
in five towns around Lake George,
including Bolton, Hague, Putnam, Fort Ann,
and the Town of Lake George. The projects
protect in-tact forests, wetlands, rocky slopes
and ridges, and streams, as well as important
wildlife habitats.
In addition to its direct conservation work,
LGLC achieved land trust accreditation in
August from the Land Trust Accreditation
Commission, an independent program of the
Land Trust Alliance. This distinction signifies
LGLC’s commitment to meeting national
standards for excellence, as a transparent,
efficient, and trustworthy organization, officials
said.

All of this also comes as the organization
prepares for a change in leadership. Executive
Director Nancy Williams will retire this
year and LGLC’s board of directors hope to
have a new executive director in place by
January.

“My retirement is bittersweet,” said Williams.
“My spirit will always be here at Lake
George, and in the memories of some of our
greatest projects: working with an unlikely
partner to protect the Padanarum lands;
discovering the resident bobcat at the Last
Great Shoreline and using that (and unfortunate
leg traps set for the area’s beavers)
as inspiration for the development of Lake
George’s first managed wildlife refuge; and the summer that I worked alongside our
stewards to create the Friendship Garden
at Peggy’s Point. Most of all I will miss the
people who made these projects possible.”

Completed Projects in 2014 include:

Putnam – Last Great Shoreline. More than
30 people took part in a celebration at the
Hague Community Center on June 13th,
marking the end to a five-year fund-raising
campaign and giving thanks to the 400-plus
people who contributed to the protection of
the Last Great Shoreline in Putnam.

The 351-acre property, which includes
Jumping Rock and is located directly across
the lake from Hague, was purchased in 2009
for $4 million. The final mortgage payment
was made February 27, 2014.

An essential linkage between the Last
Great Shoreline property and LGLC’s Gull Bay
Preserve to its south was achieved through a
purchase of three acres in April. A throughtrail
has since been created and the whole
trail system of nearly six miles is now open
to the public. The trail system also includes
access from the water, thanks to a new dock
that was installed in July.

The LA Group, a landscape architecture
and planning firm out of Saratoga Springs,
partnered with LGLC this summer to assist
in the development of a master plan for the
wildlife refuge, providing guidance on land
conservation goals, educational tools, and
public access. The LA Group is contributing
their expertise at no cost.

Fort Ann – Donation. David Van Hart of
Pilot Knob donated 63 acres in Fort Ann to
LGLC in June. Located off of Ridge Road
(Route 9L) just south of Pilot Knob Road,
the property serves as a southern anchor
for the greater Pilot Knob ridge area, which
is of conservation interest to LGLC as Lake
George watershed lands and its visible slopes and ridges.

Though not currently open to the public,
LGLC hopes to connect this land to its popular
Schumann Preserve at Pilot Knob less
than 1.5 miles to the north.

Hague – Purchase. LGLC recently completed
an amazingly successful fund-raising
campaign for the purchase of 120 acres in the
Sabbath Day Point-Silver Bay area from the
Terzian family. In just three months, nearly
$90,000 has been raised by neighbors and others
who wished to see this land protected and
available for public use. LGLC will purchase
the land for $75,000 and use the additional
funds to cover legal fees and stewardship
projects.

The property is adjacent to uplands owned
by New York state and the Silver Bay YMCA.
Its purchase by LGLC ensures the protection
of a Lake George tributary, and will provide
public access to beautiful forests and ridges.
In partnership with Silver Bay, LGLC hopes
to create a marked trail system from Route
9N to connect with Silver Bay’s existing trails
and scenic lookouts.

Lake George – Donation. The owner of
a 175-acre Lake George property known as
Matty’s Mountain has agreed to donate the
land to LGLC, completing the protection of
the headwaters of West Brook in the south
end of Lake George. The property is bordered
by LGLC’s Berry Pond Preserve on three sides, making it an ideal addition to the preserve,
and already includes trails used by the local
snowmobile club.

LGLC purchased the adjacent 1,400-acre
Berry Pond Preserve in 2008 for $2.654 million
with the understanding that, as a land
of interest to New York state, it would be sold
and added to the Lake George Wild Forest.
A contract with the state was completed and
its sale for $1.7 million is now anticipated by
the end of 2014. LGLC also anticipates selling
the Matty’s Mountain piece to the state in the
future to be added to the Berry Pond lands.

Bolton – Easement Donation. A partnership
between a landowner, a town and a
land trust has resulted in the protection of
an 84-acre property within the Edgecomb
Pond watershed, the drinking water source
for the Town of Bolton. LGLC Advisory Board
Member Rebecca Smith purchased the forested
property with the intention to donate
a conservation easement to LGLC and then
sell the protected land to the town at a greatly
reduced price.

Since nearly all of the land’s water runs
directly into Edgecomb Pond, its protection
means the safeguarding of the Town’s
drinking water. The property also adjoins
New York state’s Cat and Thomas Mountains
Preserve, and will provide additional public
recreational resources and protected wildlife
habitat.