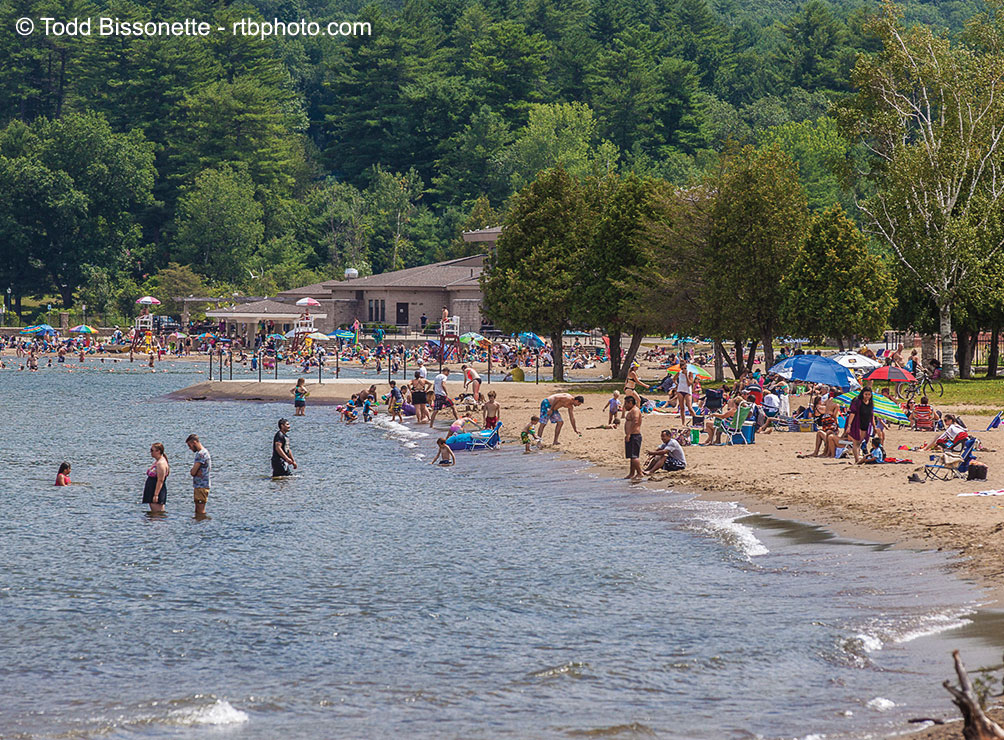 People take to the water on a recent hot day at Million Dollar Beach in Lake George, one of the many attractions for tourists in the region. Officials say the 2015 season is going strong

With a few weeks to go before Labor Day,
officials say the tourist season in the Lake
George and Glens Falls areas is strong, possibly
emerging as one of the better years in
some time.

Sunny, warm weather is one of the reasons
attributed to the strong showing, in an area
that has so many outdoor attractions.

Peter Aust, president and CEO of the
Adirondack Regional Chamber of Commerce,
said “if the weather continues to hold out
through the Labor Day weekend, we’ll have
one of the strongest summer seasons we’ve
had in the last 10 years.”
Michael Consuelo, executive director
of the Lake George Regional Chamber of
Commerce, said “we’re having a very, very
good year.”

Aust has been talking over the last few
weeks with people in the tourism industry,
like hotel owners and restaurant owners and
others, and finds that sales tax revenues
are up from last summer, as well as hotel
occupancy tax revenues. He estimated those
hikes to be about 1-2 percent, “which is a
positive sign.

But the occupancy rate for hotels is down
slightly.
“People are coming. They’re spending
money. They’re recreating, but they’re not
staying as long in our hotels,” said Aust.

He said one reason is there are more
hotels in the region where people could be
staying, outside the Lake George area.

Consuelo said another reason might be
there are fewer Canadian visitors than some
other years, perhaps because of the devaluation
of the Canadian dollar.
“I’ve seen the Canadian license plates,
but not as much. They come in for the day,
because they’re so close but maybe they’re
not staying over.”

There are no concrete figures yet, but
Consuelo, commenting just after an Aug.
11 meeting with his board of directors, said
the discussion showed that business people
are very pleased.
He said it was indicated that from
Wednesday through Saturday, hotels are
mostly sold out, but it is softer on Mondays
and Tuesdays. Overall, the tourist economy
is very strong.

Numerous events are being held there in the summer and fall.
Aust said the paid parking area has
brought in significant revenue and as of
early August, rental of the facility for events
had brought in some $40,000.
Consuelo is also pleased with the venue.
“It’s a fine feature” bringing in people for
events and concerts “and it’s not even
completely finished yet. So the future is
very bright.”

Aust said the summer weather has been
“fantastic,” with warm, sunny weekends
particularly helping to drive the tourism
economic engine. He noted that August
numbers are also usually bigger than July,
assisted by the proximity of Saratoga Race
Course thoroughbred racing to the south.

“People come to this area because they
want a combination of the Lake George
experience–the lake, the mountains, going
swimming, boating. But they also want to go
to the track,” said Aust.