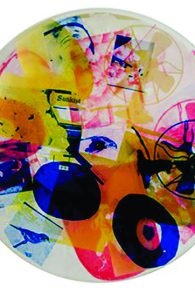 This work, “Passport, 1967,” is part of a collection recently given to the The Hyde

The Hyde Collection recently received its
largest gift of modern art in 30 years in the form
of a group of paintings, drawings, prints, mixed
media, and sculpture by many of the world’s
leading modern artists.

Museum officials said the collection of 55
works of art, including works by Josef Albers, Sol
LeWitt, Grace Hartigan, Ellsworth Kelly, Robert
Motherwell, Bridget Riley, Robert Rauschenberg,
David Smith, and 38 other artists, was given to
The Hyde by Werner Feibes and the late James
Schmitt, architects and longtime art patrons,
collectors, and friends of The Hyde.

Feibes and Schmitt, partners in work and
life, began collecting modern art in the 1950s.
Their collection evolved over a half century, as
they explored galleries in the United States and
abroad, and developed personal relationships
with artists and art dealers, Hyde officials said.
“This is a transformational gift for The Hyde,”
said Erin Coe, director of The Hyde Collection.
“The museum is largely known as a collection of
Old Masters. The donation from Werner Feibes
and James Schmitt now makes us the leading
repository of modern art in the region.”

“The Feibes and Schmitt gift significantly
enhances our collection of Modern art,” said
Coe. “It expands and strengthens its scope and
depth and opens new doors for exhibition and programmatic opportunities.”
She said the gift of 55 works to The Hyde
represents one-third of the Feibes and Schmitt
collection. The remaining two-thirds of the
collection will be bequeathed to the museum
by Feibes.

Feibes and Schmitt were first introduced
to The Hyde in 1998 by then-curator and later
director Randall Suffolk, who left in 2007 and is
the incoming director of the High Museum of
Art in Atlanta.

“I’m thrilled that these works have found a new
home at The Hyde,” said Suffolk. “The Feibes &
Schmitt Collection single-handedly provides a
vital, new dimension to the Museum’s holdings
and will profoundly impact the visitor experience
and programming for generations to come.”

“Werner Feibes and Jim Schmitt assembled
their collection very carefully and with fine
judgment, always choosing pieces they wanted to
live with in their home,” said Paul V. Turner, Wattis
professor of art, emeritus, in the Department of
Art & Art History at Stanford University. “The
works are of superb quality and over the years
many of them have been borrowed for exhibitions
by major museums in America and Europe,
including the Guggenheim, Whitney, Museum
of Modern Art, Museum of Fine Arts, Boston,
and Württembergischer Kunstverein Stuttgart.
Any art museum would be enriched by this
generous donation.”

Two works from the recent gift are currently
on view at The Hyde in the exhibition Pop Art
from the Feibes & Schmitt Collection, along with
four works on loan from Feibes. The exhibit is
on view in the Charles R. Wood Gallery until
Sept. 27. Plans for an exhibition of works in the
Feibes and Schmitt gift are under development.

Meanwhile, the museum announced more
than 600 people a week are flocking to see “The
Late Drawings of Andy Warhol: 1973-1987”
and “Homer’s America: Selections from the
Permanent Collection.” Attendance is up 30
percent over last summer.

“The Hyde Collection is bringing more than
600 people a week to the Glens Falls, Queensbury,
and Warren County area, about half of whom
travel from outside the local region, state, or
country,” said Coe. “Many visitors to The Hyde
spend money in the community, stay in local
inns and hotels, eat in local restaurants, and
shop in local stores. They are hearing about the
Museum through advertising supported by the
city of Glens Falls, town of Queensbury, Warren
County, and the New York State Council on the
Arts, plus our generous corporate sponsors and
foundations.”

TripAdvisor, the world’s largest travel website,
recently recognized The Hyde Collection with a
prestigious Certificate of Excellence. The award is
earned through consistently great reviews from
independent travelers from all over the world.
The museum is located at 161 Warren St.,
Glens Falls