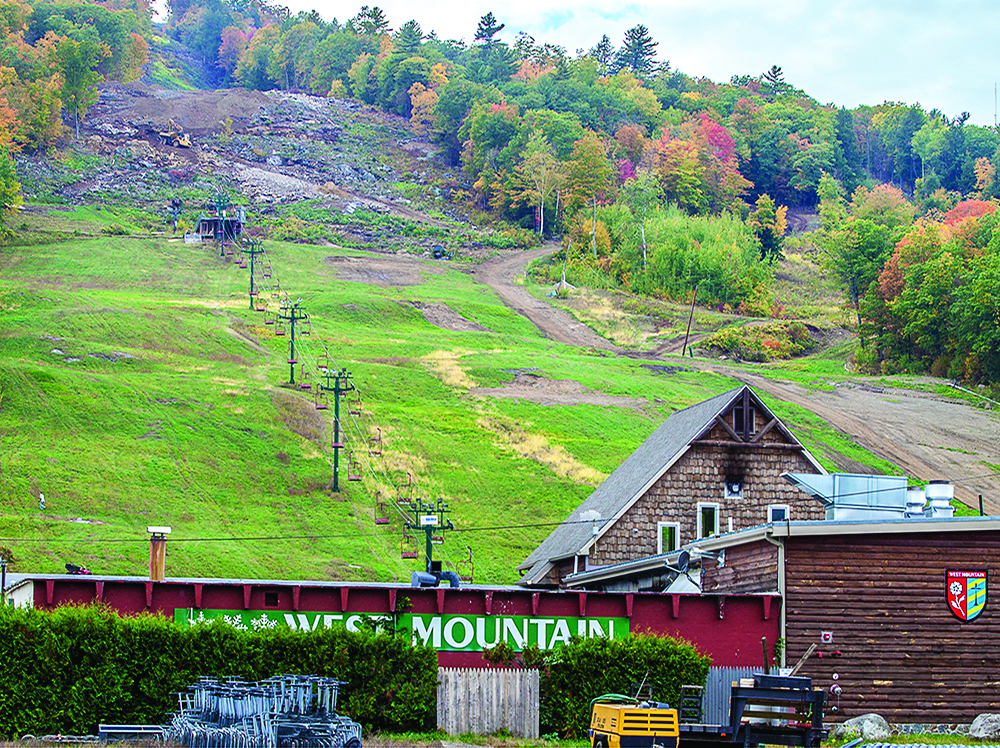 Before the snow sets in for the winter, crews are busy at West Mountain in Queensbury preparing for the season. There will be a new chairlift and a new ski trail that will run under the lift.

There many upgrades in the works at West
Mountain ski area on West Mountain Road in
Queensbury as preparations are made for the
2015-16 season.

A new chairlift is going in near the main lodge.
The summit chair used previously was installed in
1966. It went to the face of the mountain and was
later extended to the top of the mountain. It was an
old center-fold Riblet chairlift and was somewhat
difficult to get on.

“It’s long overdue,” said Spencer Montgomery,
co-owner and operator of West Mountain of the
new lift. “There’s been a clamoring for a new lift
that reached a dull roar. The lifts were routinely
inspected and up to code, but perception is reality
and when people see a lift that looks like it was put
in in 1966, that’s a hard thing to get past.”
The new lift will be a fixed-grip triple apparatus
that will leave from the courtyard, he said.

The loading point was reset to the middle of the
courtyard. The old chairlift was built where the
old lodge was–now the location of the rental shop. To get to the chairlift, skiers had to traverse
approximately 200 yards and go up about 12-foot
rise in elevation. This proved difficult for beginners
and children.

The new chairlift will provide a faster and more
comfortable ride, he said. It will span open terrain
that is now being developed into a new ski run.
The new run underneath the chairlift will be
called the Gnar-Wall. The Gnar-Wall comes off of
the Holy Mackerel, an older ski trail from years
past. The un-maintained Holy Mackerel had
grown in over 90 percent of its original width and
had no snow making or lighting.

Holy Mackerel has been brought back to its
original condition and the Gnar-Wall was added
to the cleared terrain underneath the chairlift. It
will give skiers a coveted view from the top of the
mountain, Montgomery said.

The new run will allow the mountain to host
international F.I.S. and U.S.A.A. races near the
main base and lodge.
The project itself has been regulated by the state Department of Labor, since chairlifts are
considered an amusement ride. An independent
engineering firm was brought on site during the
planning process.

Montgomery said development of the Gnar-
Wall was somewhat accidental.
“We had to clear the land anyway for the chairlift.
We thought, we’re never going to keep the kids
off of it. We considered roping off the top of the
hill before finally coming to the rather expensive
decision of making the cleared terrain skiable,”
said Montgomery.

Another big development is improved snow
making. West Mountain has entered into a deal
with HKD Snowmakers out of Natick, Mass. New
snow guns, air water sticks and fan guns were
purchased to upgrade snow-making technology.
The upgrade will increase snow making capacity
by about 50 percent, he said.

Some $300,000 was invested in 275 new fixtures
of LED lights. National Grid has been working
with the mountain on the project that will replace
old fixtures with new ones, said Montgomery.

Montgomery took over as co-owner and
operator of the mountain in December of 2013.
The mountain was purchased through Chapter 11 bankruptcy by Apex Capital LLC, of which
Montgomery is a partner. Montgomery’s wife,
Sarah Montgomery, acts as director of public
relations and oversees the day-to-day operations
of the facility.

Immediately after the purchase, about $500,000
of renovations and cleaning were done at the lodge,
as well as a $70,000 in bathroom remodeling.
Montgomery eventually plans to develop the
Triple Base area. The development would include
shops and restaurants with mixed-use condos and
time-share units, and possibly an athletic club.

“It’s a beautiful piece of property. It could
be done in a New England style. It’s got the old
cobblestone fences. There could be walking paths,”
said Montgomery.

The main lodge would remain the base area for
lessons and tubing. The Triple Base area would be
quieter, with a “destination-resort” feel, he said.
West Mountain has a 1,000-foot vertical drop
from peak to parking lot. The average trail length
top to bottom is around 1.2 miles. The new chairlift
will expose these features.

“We want to be a family ski center that is far
less expensive. We want to be an affordable resort,
and make it up on volume,” said Montgomery.