The Adirondack Thunder hired Nathan Gosline to join their front office in advance of the 2017-18 season as the director of corporate sales.

Gosline, a Queensbury native, has over a decade of sales and marketing experience in the sports industry. He joins the Thunder from the Tampa Bay Rays organization, where he served as director of sales for both Rays spring training and the Charlotte Stone Crabs of the Florida State League. Gosline worked within the Rays organization for two seasons and oversaw all sponsorship sales for both entities.

Gosline also worked in the ECHL from 2002 -08 with the Florida Everblades, beginning as group sales manager before he was promoted to director of sales in 2005. Under his direction, the Everblades won the ticket sales department of the year at the 2006 ECHL League Meetings.

He is a graduate of both Queensbury High School and SUNY Adirondack. 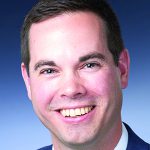 NBT Bank announced that Matthew Easterly has been promoted to assistant vice president.

He is a financial consultant at NBT Financial Services, a division of NBT Wealth Management, and is based at NBT Bank’s office located at 295 Broadway in Saratoga Springs.

A resident of Saratoga Springs, Easterly joined NBT in 2007. He earned his bachelor’s degree in business at SUNY Plattsburgh and holds state licenses in life, health and long term care insurance. He is FINRA Series 7 and 63 registered with LPL Financial.

Founded in 1978, HCR Home Care is a provider of home health services to patients, physicians and other health care professionals across New York state.

Hilltop Construction in Hudson Falls has added Ned Kneebone to its team.

Kneebone has 25 years of experience in the residential construction business.

He will be responsible for overseeing various Hilltop projects, as well as maintaining quality control.

The Lake George Land Conservancy (LGLC) announced the recent addition of two new directors to its board, Peg Olsen and Robert Singer.

Olsen’s history with the LGLC goes back to the late 1980s. Olsen was co-partner in the firm Environmental Communication Services and was hired as a consultant by the Lake George Association Fund. Her initial task was to conduct a survey of landowners in the watershed to determine the desire and need for a local land trust. The result was that the Lake George Association Fund put together a separate board of directors and incorporated the LGLC in 1988.

She has a Ph.D. in ecological economics from Rensselaer Polytechnic Institute. She is vice president of Atlantic Flyway and International Programs for Audubon. She worked for The Nature Conservancy for 14 years.

With over 20 years of experience in the outdoor sporting goods industry, Singer is currently international sales and marketing manager for Filmar Corp., a manufacturer of winter sports accessories based in Montreal.