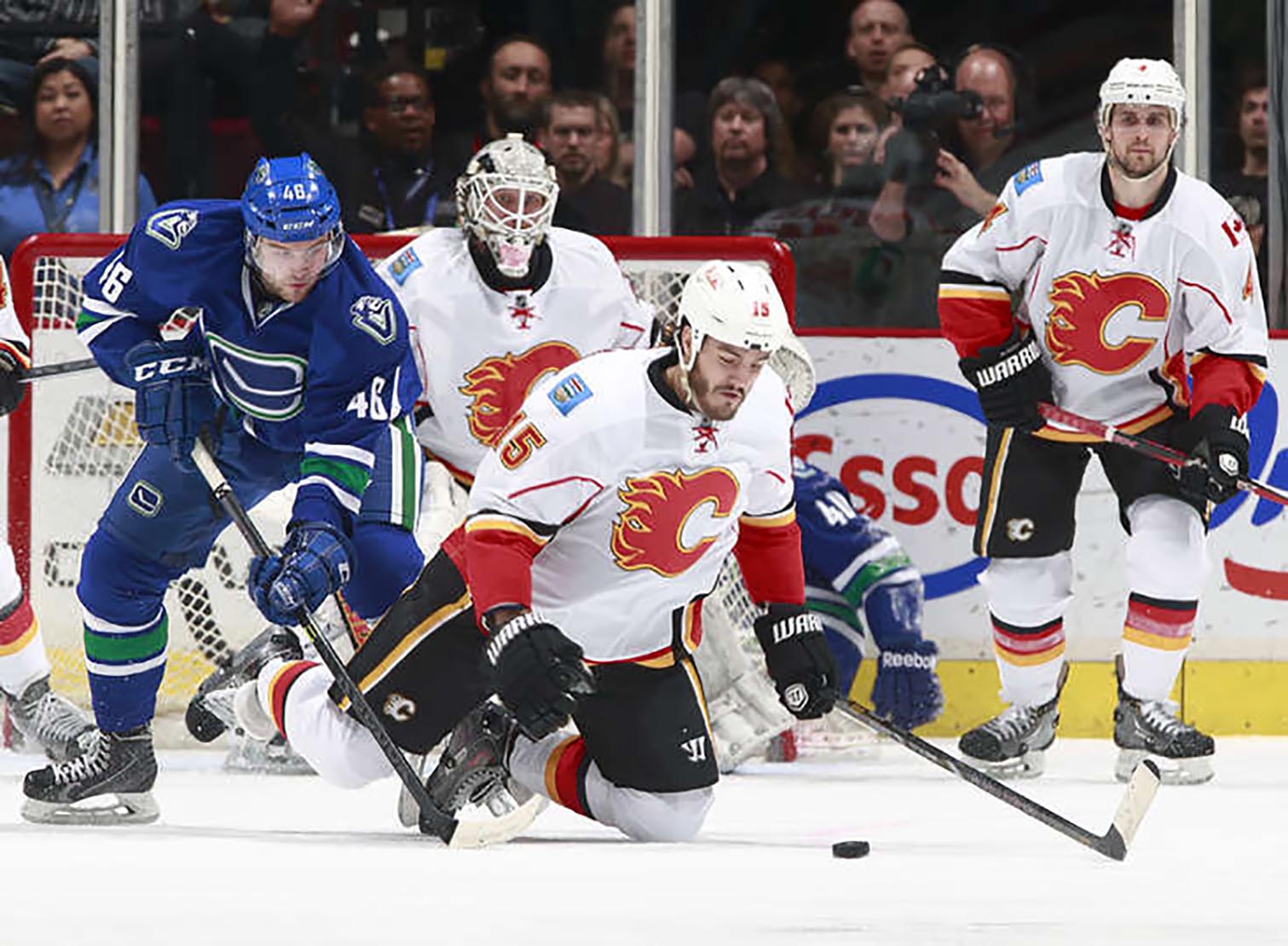 The NHL’s Calgary Flames, shown here, is bringing its AHL affliate to Glens Falls. The team will keep “Adirondack” in its name and could sport flame-themed uniforms like these.

The Calgary Flames of the National Hockey League (NHL) announced May 5 that the American Hockey League’s board of governors has approved relocation of its AHL affiliate to Glens Falls, where they will play this coming season at the Glens Falls Civic Center.

With the loss of the Glens Falls Phantoms early this year, local officials were concerned about keeping hockey at the local arena and successfully business themselves looking for a new team.

The franchise owned by the Flames is from Abbotsford, British Columbia, Canada.
“Glens Falls has had a terrific history with the American Hockey League and will be an ideal location and environment for the development of our prospects,” said Flames General Manager Brad Treliving. “When we announced on April 15 our discontinuation of operations in the City of Abbotsford, we had a few options available to us and there was much speculation about Glens Falls.”

“There has been a high level of interest demonstrated to ensure the AHL remains in that market. We look forward to finalizing details and beginning this new partnership,” he added.

Glens Falls celebrated its 25th season hosting an AHL team and joined an elite group of just nine other active markets that can make such a claim, according to officials for the departing Phantoms.

Ed Bartholomew, president of EDC Warren County, said officials are “enthusiastically supportive of the Calgary Flames organization coming to Glens Falls. This is a continuation of our effort to keep American Hockey League alive in Glens Falls.” He confirmed that the team will bear “Adirondack” in its title, but did not know at press time if “Flames” would by used by the organization. But keeping “Adirondack” in the name “provides great recognition for this region,” he noted.

“We attribute our ability to attract an AHL team to our regional fans,” said Bartholomew. Though the Phantoms had a losing record over five years, “the fans come out and support our team.”

Despite the team’s losing record over the past five years, the attendance averaged more than 4,000 per game in the Civic Center. It seats 4,800.

Before the Phantoms, the Detroit Red Wings AHL development program in Glens Falls captured four Calder Cup titles between 1979 and 1999 under the banner of the Adirondack Red Wings. The Philadelphia Flyers (Adirondack Phantoms) called Glens Falls home since 2009 and left this year at the conclusion of the 2013-14 season.

The Phantoms, who were formerly the Philadelphia Phantoms, the top minor league affiliate of the NHL’s Philadelphia Flyers, will become the Lehigh Valley Phantoms and play in the new multi-purpose arena in downtown Allentown, Pa.

“The Glens Falls community served as wonderful hosts for their temporary team for five years from 2009 through 2014 while the team’s new building in Allentown, Pa., was being arranged and constructed,” Phantoms officials said in a statement on the team website. “The team, players, staff and everyone involved will never forget their time in Glens Falls playing for the incredible die-hard hockey community of the North Country.”

Officials praised the local fan base for “the passion you have shown for your hockey team … We are proud to have represented you for these five years and can’t thank you enough for serving as such wonderful hosts during our tenure. Thank you for giving us the opportunity to help show the hockey world the kind of fan support and loyalty you can provide for your local team.”

Bartholomew said having the team provides a boost to area restaurants and other businesses. He noted that on game night, 130 people are employed at the civic center, divided among the center itself, the city and the hockey organization.

The 2014-15 AHL season wil be the 79th season of the American Hockey League. The regular season begins in October and will end in April 2015. The league’s 2015 Calder Cup playoffs follow the conclusion of the regular season.