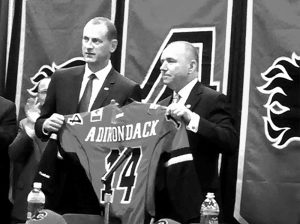 Brad Treliving, left, GM of the Calgary Flames of the NHL, unveils the jersey of the AHL affiliate Adirondack Flames with Brian Petrovek, president of the Glens Falls-based team.

At an event in May that resembled a pep rally more than a press conference, the Calgary Flames of the American Hockey League were officially welcomed by the city of Glens Falls as the team that will make the Glens Falls Civic Center its home and continue a longstanding tradition of hockey in the region.

“Well, this is a hockey crowd,” said Brad Treliving, general manager of the Calgary Flames of the National Hockey League, as he stood in front of not only media, but fans whose number topped well over 100. They clapped and hooted, showing their enthusiasm throughout the event.

The Glens Falls club will be the minor league affiliate for Calgary, moving to the region from Abbotsford, British Columbia. They begin play in the AHL this fall and tickets are already on sale.
Hockey has been played at the Civic Center for 25 years, starting with the Adirondack Red Wings, affiliated with the NHL’s Detroit Red Wings. The Philadelphia Flyers then brought their AHL team in, the Adirondack Phantoms, for a five-year period. But the team left for Allentown, Pa., after the season that ended early this year.

It was important for local officials to keep hockey in Glens Falls, not only because of the tremendous community support, but the economic benefits associated with it.

“This is a hockey market the American Hockey League needs to be in,” said Treliving, who first came to Glens Falls years ago as an opposing player. “We’re excited as an organization to be here.”

Treliving is tasked with bringing a Stanley Cup to Calgary, and an important part of that, he said, will be the development of players at the AHL level. The young players will know, he said, “to get to Calgary, you’ll have to go through Glens Falls.”

Treliving promised the fans an exciting, aggressive brand of hockey. Another important part of the relationship is that the organization will be very involved in the community. Community service “is not an option; it’s a requirement,” he said.

The team signed a multi-year deal and has already established headquarters in the Civic Center. But officials wouldn’t say how many years the contract is for.

Brian Petrovek, who has extensive experience running AHL teams in Utica and Portland, Maine, will run the team as president of Adirondack Flames LLC.

Leading the news conference was Ed Bartholomew, president of EDC Warren County. He and Glens Falls Mayor John “Jack” Diamond were singled out by many for their tireless work in trying to keep hockey in the region, and the support of the City Council was recognized as well.

Diamond and Bartholomew stressed that without the strong support in the region for AHL hockey, local officials would not have been able to seal the deal. Arnie Will of Empire State Development expressed similar sentiment, addressing the crowd on behalf of Gov. Andrew Cuomo.

In a news release, Cuomo welcomed the team and said the Civic Center will undergo renovations to meet professional hockey standards while improving and making the Civic Center more competitive for other regional entertainment events.

Phase 1 renovations consist of technology upgrades for the center, including enhanced wi-fi within the facility and conference room, upgrades to the center’s outside signs, electronic signs within the center, and video. The renovations and team relocation will result in an estimated 45 jobs and approximately 40 construction jobs, officials said. Phase 2 of the project is to include renovations to team locker rooms, weight exercise rooms, offices, and power and lighting upgrades with the within arena.

Petrovek said as funding becomes available, the Flames would be a willing partner in the coming years in improving the center.

The city has already received $675,000 from Empire State Development through the Capital Region Economic Development Council, to get the work going.

“The Calgary Flames have chosen a very special home in Glens Falls and I join many enthusiastic hockey fans in welcoming them,” said Senator Betty Little, an AHL season ticket holder. “Plans to update the Civic Center were a key component in reaching an agreement with the team, and these improvements will also help attract shows and events for many years to come.”

Warren County Economic Development Corporation President Edward Bartholomew said, “The City of Glens Falls has been working hard to bring a hockey team back to the community, and renovations to the Civic Center were an integral part of that effort. We thank New York State for its partnership and our loyal hockey fans for their continued support and participation. We look forward to this next chapter of Glens Falls hockey history.”

The team website is www.adirondackflames.com. The number for tickets and information is 480-3355.