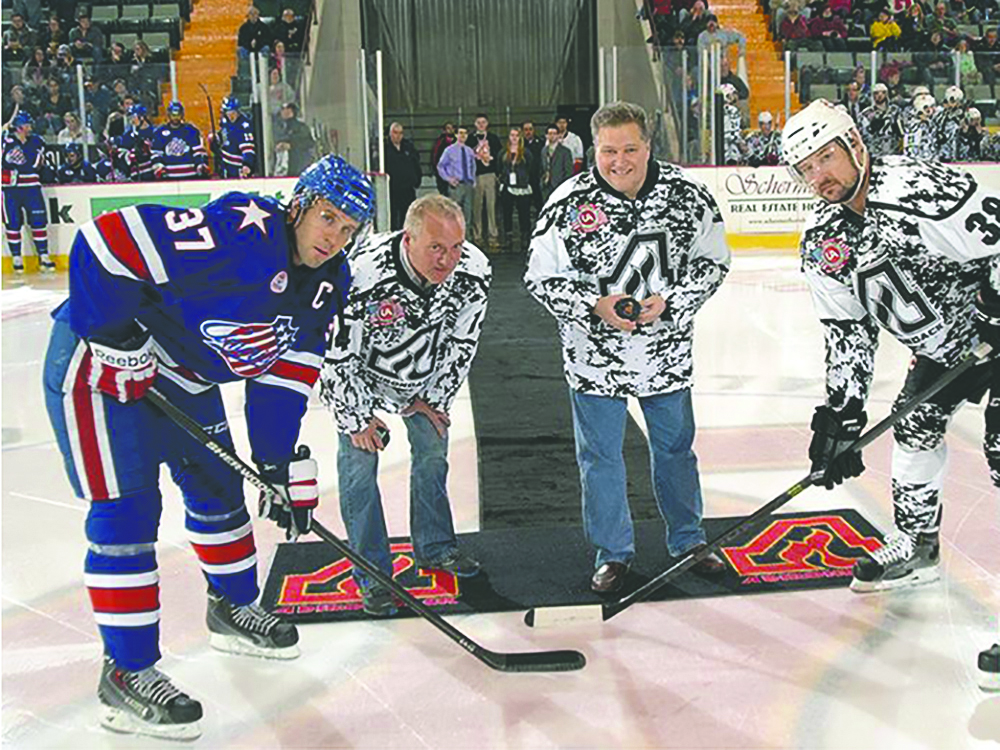 The Adirondack Flames raised $16,594.00
from a post-game jersey auction and donated the
funds to the Wounded Warriors Project.

The auction was held on Military Appreciation
Night, sponsored by Local Plumbers and Steamfitters
773, in November.
The event was the first themed jersey night
of the season as the Flames donned Snow Camo
jerseys to show appreciation to the U.S. Armed
Forces.

After the Flames defeated the Rochester
Americans 2-1, the jerseys were auctioned off
individually to fans with every jersey being sold,
team officials said.
The evening’s top seller was David Wolf, whose
jersey went for $1,750, one of the highest bids
ever on a themed jersey in Glens Falls, the team
said. Emile Poirier also eclipsed the $1,000 mark,
as his bid finished second at $1,050.

“We’d like to thank Larry Bulman and Scott
Martel, Local Plumbers and Steamfitters 773,
and the United Association for their sponsorship
of the evening and our fans and corporate partners
who came out in support of the Wounded
Warriors Project,” Adirondack Flames President
Brian Petrovek said. “Raising over $16,000 for
such a great cause is an incredible feat and
on behalf of our players and staff we’d like to
express our appreciation to the community for
their response and generosity.”

Military Appreciation Night also recognized
several veterans from the local community from
a variety of different branches of service with an
arena wide public address recognition during the
second period.

Martel, business manager of Steamfitters
and Pipefitters 773, and Bulman, international representative of the United Association of
Journeymen and Apprentices of the Plumbing
and Pipe Fitting Industry of the United States,
Canada and Australia, dropped the ceremonial
first puck, after a national anthem that featured
the Glens Falls VFW Color Guard and a large
American flag held over the ice by Adirondack
Flames Youth Hockey players.

“We thought the night went really well, it was
wonderful to be a part of and to be involved with
the Flames,” Bulman said. “We’re also pleased
to see the money go to such a great program
like Wounded Warriors. We’ve never forgotten
our troops. There are many families that have
had members hurt in the line of duty and this
program helps them. We’re honored and proud to
partner with the Flames for such a great night.”

The Flames also honored Chief Warrant Officer
Bill Huestis of Ticonderoga as the United
Association VIP Hero of the Game. Huestis
served for over 20 years in the U.S. Army as a
Special Forces operator, instructor, senior advisor
and commander. His deployments included
stints in Italy, Bulgaria, Bosnia, Kosovo and
Iraq. His awards and decorations include the
Special Forces and Airborne Tab, Bronze Star
and Combat Infantryman’s Badge. Huestis is
currently in his first year apprentice working at
Global Foundries in Malta, through the United
Association VIP Program.

The mission of the Wounded Warriors is to
foster a successful, well-adjusted generation of
wounded service members. The project aims to
raise awareness and enlist the public’s aid for
the needs of injured service members.

For more information, or to donate, visit
http://www.woundedwarriorproject.org/.