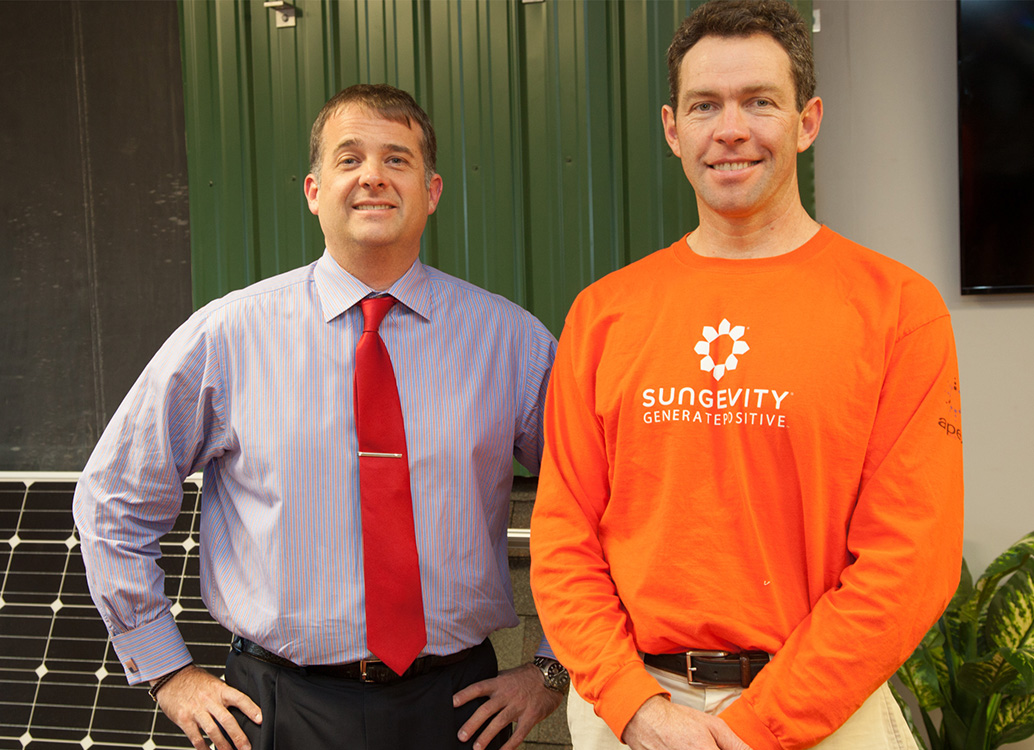 Apex Solar in Queensbury moved up the
street to larger quarters and a chance to
consolidate its office, warehouse and retail
showroom in one place.

The new headquarters are at 64 Main
St., near Northway Exit 18. The business
is renting the new space.
Stan Dovert, one of the owners of Apex
Solar, also owns the old building at 52 Main
St., which is now the home of a new tenant,
Patriot Multisport.

Apex designs and installs solar electric
power systems, most of them at residences.
This month, they unrolled a new rental
program and have already signed up the
first customer. Ben Sopczyk, director of
marketing at Apex, explained that the
lease system requires no money upfront
and is designed so that the homeowner’s
rent payments are less than the energy
savings.
Generally, there is a 20-year lease for a
system designed to cancel out the cost of
electricity from the grid.
He said typically, the homeowner will
pay a modest access fee to the electric utility
company for the right to draw electricity
from the grid when it is needed. When
the solar system is providing electricity,
the homeowner gets a credit from the
utility company on a kilowatt for kilowatt
basis.

Once a year, usually around April 1, the
homeowner and utility company “settle
up.” According to Sopczyk, for 60 to 70
percent of customers, the net bill is zero.
At the end of the lease period, Sopczyk
said, the solar system will still be producing
electricity at about 85 percent of the
rate it did when new. At that point, the
homeowner has three choices: to purchase
the system at a discounted price, to renew
the lease, or to have Apex take back the
system.

A fourth option would be to replace the system with a new one but, Sopczyk said,
he usually recommends making up the 15
percent decline in production by reducing
energy use.

Most customers still purchase their
solar systems and take advantage of available
tax credits. Sopczyk sees the lease
arrangement as a good option for people
with a low debt tolerance and little use for
the tax credit.

Apex does not manufacture systems,
just designs and installs them. They have
30 fulltime installers on their staff and,
on most days, four or five installations
are in progress. Most installations take
only one day, according to Sopczyk. They
also do installations on contract for national
companies with no local installation
staff. Whenever possible, they use United
States-made panels, he said, and they have
“unique installation methods.”

The next project for the company is a
revamp of its webpage, ApexSolarPower.
com. In the meantime, there is information
on the old site or by phone at 309-2786.