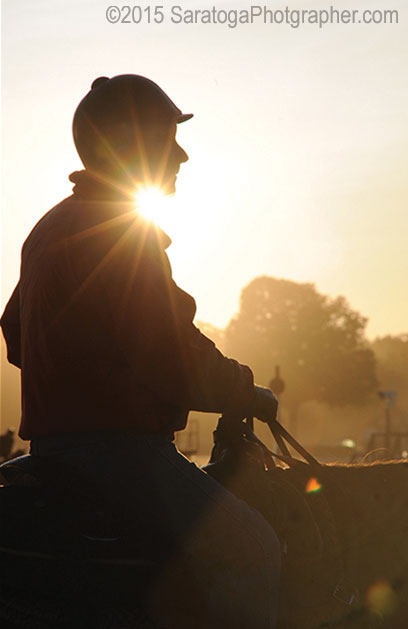 The annual summer meet at Saratoga Race
Course generates $237 million in economic activity
and nearly 2,600 jobs across the greater Capital
Region, according to the findings of a study
released today by the Saratoga County Industrial
Development Agency (IDA) in early March.

Commissioned by the IDA as an update to a
recent impact study, the report concludes that
the economic rewards from the operation of the
race course have increased by nine percent since
2011 across a nine-county territory.

Conducted by Camoin Associates of Saratoga
Springs, the 2014 update also shows a surge in
job growth of more than 30 percent attributed
to the operation of Saratoga Race Course and
its participants, including owners, trainers and
jockeys, as well as tourism activity generated by
the historic track.
“The results of the Economic Analysis of
Saratoga Race Course give us a real sense of
optimism that the future of the racing and breeding
industry in New York state, which is such an
integral part of the economy of our city, county
and region, is finally, after many troubled years, on
a sound financial path to success,” said Saratoga
County IDA Chairman Raymond Callanan.

Chris Kay, Chief Executive Officer and President
of the New York Racing Association (NYRA),
said “it had been obvious to me and many others
that much has changed for the better in
the intervening years since the last report had
been prepared. And it is extremely beneficial to substantiate this empirical evidence with facts
and data.”

He added the revised study “demonstrates
unequivocally that the economic benefits traced
directly to the operation of Saratoga Race Course
continue to grow at a steady pace. As someone
who has spent much of his career in the tourism
industry, I can attest to the fact that most municipalities
and regions would envy for an attraction
that yields these type of economic rewards.”

IDA officials said the study, based on numbers
from 2014, analyzed the impact of Saratoga Race
Course on various sectors of the regional economy,
including overall spending, employment,
thoroughbred breeding, tourism and hospitality,
and tax revenues generated to local and state
governments. It also researched the impact of
video lottery terminal (VLT) revenues on the
racing industry since the opening of Resorts World
Casino in 2011.

Its findings, the IDA said, show that Saratoga
Race Course generates an estimated $237 million
in economic impact each year from three primary
components: nearly $43 million in output attributed
to track operations overseen by the New York
Racing Association; $52 million in expenditures
generated from spending by participants, including
owners, trainers, jockeys and breeders; and a
nearly $142 million sales impact from spending
by tourists and visitors to the region.

The study accounted for the way track-related
spending circulates throughout the regional
economy creating an economic “ripple effect.”

Among the key findings, IDA officials said,
include:

â€¢ Hospitality and Tourism Industry:
Tourism continues to grow in Saratoga, with
spending by tourists and visitors generating 60
percent of the total $237 million economic impact,
or the equivalent of $142 million. This data
represents a 60 percent increase in the spending
impact from tourists since 2011. Visitor surveys
conducted during the 2014 meet indicate strong
out-of-market tourism numbers, with 59 percent
of guests at Saratoga coming from outside the
nine-county study area.

According to Cindy Hollowood, general manager
of the Holiday Inn Saratoga Springs, hotel occupancy
at her property is on average 20 percent
higher on racing dates compared to non-racing
dates in the month of July while the average daily
rate is 50 percent higher when the race track is operating during the corresponding month.

This trend is reinforced in Albany County
which in 2014 experienced its highest level of
occupancy at 84.1 percent and highest average
daily room rate at $106 during the month of
August, which corresponds with the height of
the Saratoga meet.

â€¢ Employment:
The race course creates the equivalent of
2,588 full-time jobs in the region. Between 2011
and 2014, employment attributable to the operation
of Saratoga Race Course increased by more
than 30 percent throughout the nine-county
study area with significant growth spurred by
the tourism sector where job numbers increased
by 58 percent.

The occupancy tax figures, or room tax on
lodging, continue to generate record revenues for
Saratoga Springs and Saratoga County and have
more than doubled within the county since 2000.

The 2014 meet marked the fourth straight year
of record occupancy tax receipts from overnight
hotel stays within the city and the third consecutive
year of record receipts for the county, a
significant portion of which is directly attributable
to the race course.

â€¢ Purses:
The study finds that the purses NYRA restricts
to New York-bred horses have been one of the
major drivers of the demand for and investment
in thoroughbred breeding operations in New
York state. In 2014, NYRA designated more than
$40 million in purses to races restricted to New
York-breds, a 67 percent increase from the $24
million allocated in 2011. Additionally NYRA ran
678 races in 2014 restricted to New York-breds,
which is 13 percent more than the statutory minimum of 600.

â€¢ Thoroughbred Breeding:
At a time when the national breeding industry
has declined, New York state has experienced a 25
percent increase in foal production and a 49 percent
increase in sales of New York-bred yearlings
at auction between 2011 and 2013. The timing of
this increase in horse breeding and sales activity
aligns with the arrival of VLT revenues in 2011
and the additional purses, or prize money, NYRA
has designated for races restricted to horses bred
in New York stat.

â€¢ Farmland:
The resurgent breeding industry has spurred
an increase in the number of horse farm properties
in Saratoga County which grew 14 percent
between 2010 and 2013. Horse farms account
for 3.7 percent of agricultural parcels in the
nine-county study area in comparison to only 2
percent in New York state.

For more information or to access the complete
report, visit www.saratogacountyida.org.