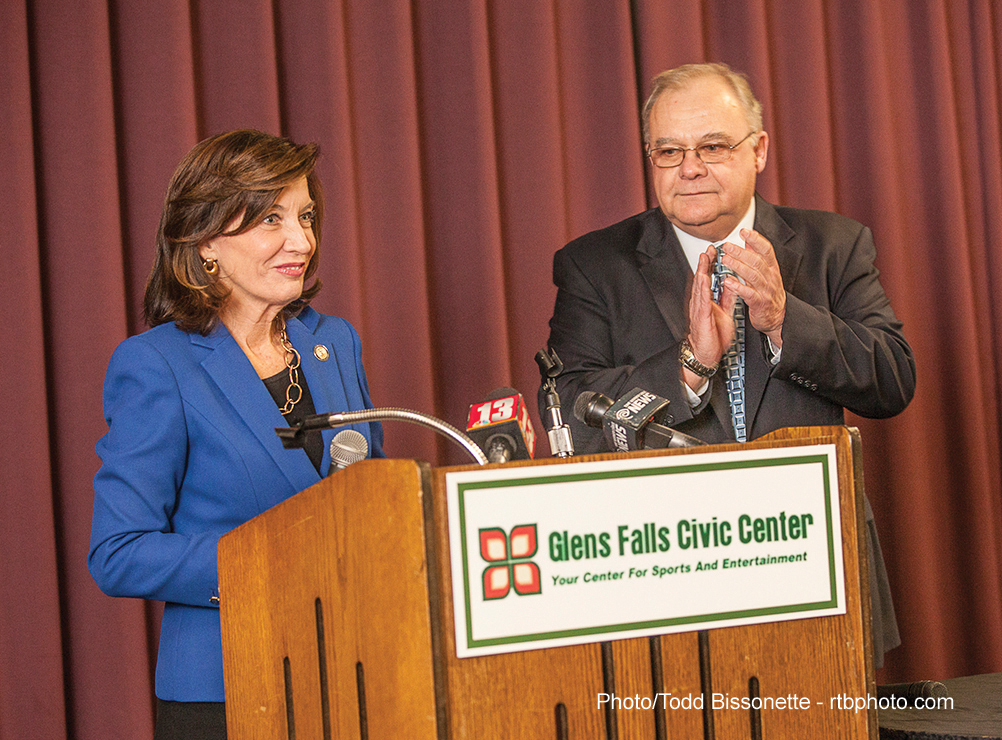 Lt. Gov. Kathy Hochul announced on Feb. 9 a $2 million state grant for upgrades to the Glens Falls Civic Center, with Mayor Jack Diamond and other officials on hand.

The general manager of the Glens Falls Civic Center was excited, “almost speechless,” at word of a $2 million state grant for upgrades at the downtown facility. Work will start “as soon as we get the green light.”

State Lt. Gov. Kathy Hochul was in Glens Falls on the afternoon of Feb. 9 to announce the capital improvement grant.

Hochul said the funding can be applied toward a new center scoreboard, locker room improvements, new portable chairs for floor seating, floor covering and other projects within the building.

Mead, who was hired as general manager last year, called it “a great day for the Civic Center … We’re ready to tackle some of the projects that are needed.”

Among them, he said, was a new, more modern video scoreboard, “probably the biggest investment” that will enhance the game day experience for fans.

The arena needs new covering for the ice surface, for when basketball games and other events are held. The current covering is in disrepair. Replacing seats that date back to 1979 will also be done, in addition to adding some theatrical lighting and fresh paint to some of the areas.
The $2 million grant supplements an earlier state grant of nearly $700,000, which has been used to erect a new outdoor marquee sign, install LED lighting in the arena, develop Wi-Fi throughout the building and upgrade the sound system.

Glens Falls National Bank has purchased promotional rights to appear on the new marquee sign. It is a five-year sponsorship contract, according to the Adirondack Civic Center Coalition.

Additionally, State Sen. Betty Little had secured an additional funding for painting the steel beams in the arena, according to EDC Warren County.

EDC President Ed Bartholomew–Glens Falls mayor when the building was constructed and opened in 1979–who worked on the various grant applications, thanked Gov. Andrew Cuomo, Little and state Assemblyman Dan Stec “for their ongoing advocacy and commitment to this facility and this region. Gov. Cuomo told Mayor Jack Diamond and I that he was going to assist in the renovations of our Civic Center and he has done so”
“This level of funding will significantly change the landscape and improve the abilities for this center to compete for shows and events,” said Bartholomew.

These improvements will showcase the center in time for next year’s ECHL All Star game in January of 2017, he added.

The center is home to the Adirondack Thunder of the East Coast Hockey League. The team is affiliated with the Calgary Flames of the National Hockey League.

In 2014, things were put in motion to put the Civic Center in the hands of business and community leaders who wanted to increase its economic value as a sports and entertainment venue. The city Common Council approved the sale to a group calling itself the Coalition to Save the Civic Center, now the Adirondack Civic Center Coalition.

The Coalition bid $600,000 for the facility and has been hoping to make upgrades to modernize the 35-year-old arena. They took over management in April of 2015.

Glens Falls Civic Center is a 4,774-seat multi-purpose arena located in downtown Glens Falls. Built in 1979, it was originally the home of the Adirondack Red Wings, the former American Hockey League affiliate for the Detroit Red Wings.