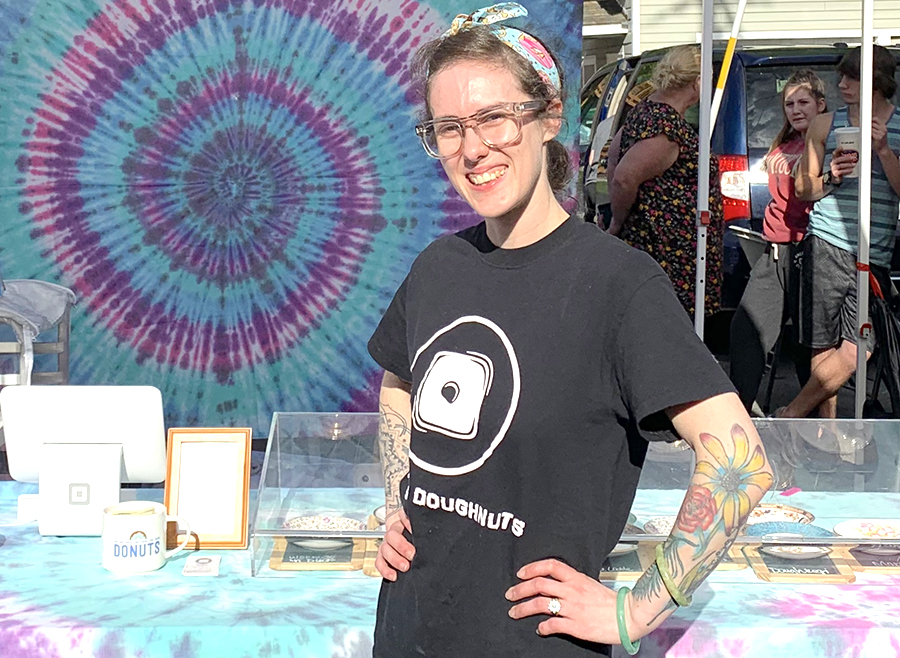 by Andrea Palmer
Natascha Pearl-Mansman is finishing her first year in business as Darling Doughnuts, and is pleased with the popularity of her company.
“I’ve always had an entrepreneurial spirit, but it wasn’t until after the birth of my daughter that I took the leap and started my own business,” said Pearl-Mansman. “I suppose I spent too much time watching baking competitions on TV while I was up at all hours of the day and night with a newborn. I’d sit there and wonder how all these people were lucky enough to be doing that for a living. I realized you can’t sit around and wait for the perfect time to start something, that you have to just get up and go for it.”
Pearl-Mansman has always baked for fun, and enjoyed tackling new recipes and techniques.
“You could say I grew up in a foodie family, my dad being the savory cook and my mom making amazing desserts,” said Pearl-Mansman. “I made cakes, bagels, pretzels, cookies, pies and even croissants, but I was honestly afraid of deep frying anything.”
Pearl-Mansman’s husband, Joe Mansman, begged her to try making doughnuts.
“I knew right away I was on to something, so I made them again and again … That’s how Darling Doughnuts was born,” said Pearl-Mansman.
Pearl-Mansman worked for several small businesses over the years before starting her own.
“I really absorbed a lot watching other entrepreneurs at work. Everything I’ve needed to run my business, I’ve learned from a combination of observation, ‘Shark Tank’ and Google,” said Pearl-Mansman. “I spent six months before I officially opened for business, reading everything I could and getting all of my legal stuff together, in addition to perfecting my recipes.”
Darling Doughnuts quickly grew operation as orders went from a few dozen at a time to 420 a day for events.
“I’m at the point now where the demand has exceeded my production capabilities at my current space, so in order to scale my business, I will end up needing to move into my own facility eventually,” said Pearl-Mansman.
The first big order for Darling Doughnuts came from Death Wish Coffee Co. in Saratoga Springs. Pearl-Mansman was subsequently interviewed on News Channel 13 at an event, and about a month later held her first pop-up. She held several pop-up events at The Shirt Factory toward the end of the 2018 Thursday Market season, and had an pop-up shop at Harvest Fest in downtown Glens Falls. As the 2018 holiday season approached, Darling Doughnuts began to sell out at every pop-up shop.
She said between pop-ups she has scheduled, weddings, graduation parties and wholesale orders,she is booked for the entire summer.
Future plans are on Pearl-Mansman’s mind.
“I would love to open up a brick-and-mortar location for Darling Doughnuts in the future. That will mean taking on investors and/or debt. A year ago, I didn’t even know if people would spend the money on artisan doughnuts. Now I actually have to turn people away because there’s only so much I can do all on my own and with the equipment I have now. I have been absolutely blown away by the response, and I’m so thankful to all my customers,” said Pearl-Mansman.
Darling Doughnuts can be found at the Palette Cafe in Saratoga Springs, the Queensbury Hotel and pop up shops. Pearl-Mansman travels to events and business to deliver and cater orders. The company’s social media pages are updated regularly with upcoming locations.
“Being a mompreneur and a baker means long hours and lots of hard work,” said Pearl-Mansman. “But seeing people’s reactions when they try my doughnuts makes it all worth it. I am amazed by everything I’ve managed to accomplish in my first year in business, and I can’t wait to see what next year has in store.”