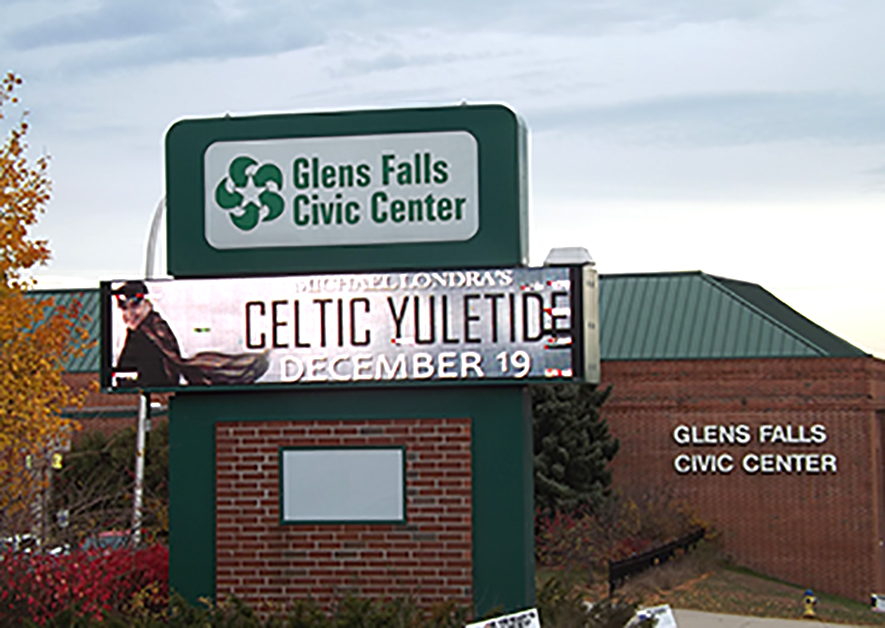 The 35-year-old Glens Falls Civic Center will be sold to a local contingent, the Coalition to Save the Civic Center, under a lease-purchase agreement slated to close in December

The future of the Glens Falls Civic Center
has been put in the hands of business and
community leaders who want to increase its
economic value as a sports and entertainment
venue.
On Oct. 21, the city Common Council gave
unanimous approval to a proposal by a group
calling itself the Coalition to Save the Civic
Center.

The deal, which is structured as a leasepurchase
agreement, is scheduled to close in
mid-December.
The Common Council chose the Coalition’s
proposal over an $800,000 offer from
Adirondack Sports and Entertainment. That
group, led by former professional hockey player
Kevin McCloskey, proposed creating a yearround
hockey academy at the arena.

Burke, who also is chairman of the Glens
Falls Business Improvement District, said the
group already has raised more than $650,000,
primarily from local businesspeople. It is looking
to raise about another half a million for
working capital.

“All of us came together and said ‘This is
important,'” Burke said. “[Having a civic center]
makes us different from other small cities
that don’t have such things, in a positive way.”

He said a study by the Adirondack Regional
Chamber of Commerce put the arena’s direct
economic impact at about $13 million a year.
Edward Bartholomew, who heads both the
Glens Falls IDA and the Warren County Economic
Development Corp., applauded the deal.

“This is truly a community arrangement
with support from the private sector because
they believe the civic center should remain
a sports and entertainment venue,” he said.
“It’s like putting a fresh coat of paint on [the
arena] with some new players and some new
spirit and energy.”

The city put the civic center on the block,
earlier this year, because the costs of supporting
it were becoming a burden. Bartholomew
said the 4,787-seat arena has had an operating
loss of between $500,000 and $600,000 a year
for the past several years. This, coupled with
bond principal and interest payments, brought
total costs to more than $900,000 a year.
“The city could not afford to maintain its
operation unilaterally,” he said.

The Coalition’s lease-purchase plan will
keep ownership of the civic center with the city
for at least five years. Burke, who presented the
proposal to the Common Council in September,
said there will be an up-front payment followed
by installments. The largest installments will
be made in the first two years, with the remainder
of the $600,000 spaced out over three years.

The city would be responsible for insurance,
snow removal, water and sewer, bond payments
and any necessary capital improvements.
The city’s proposed general budget for 2015
puts support for the civic center at $393,000 for
next year. The 3.5-acre property would remain
off the tax rolls.

Burke said keeping the city as the owner
of record would make it more likely for the
civic center to attract state grants through
the Regional Economic Development Council
application process. The Coalition also is in
discussions with Warren County about sharing
in the bed tax collected on hotel rooms.

“No commitments have been made, but
certainly we want to make a good case so
maybe they can help us with supporting the
operations of the arena,” Burke said.

Responsibility for operating the civic center
would fall to a new nonprofit, which is currently
under formation. It will take over the 501(c)
(3) status of the Hudson River Local Development
Corp., which is merging into the Warren
County EDC.

Burke said once the Coalition has completed
the task of setting up the nonprofit–including
writing bylaws and establishing a board
of directors–and closes on the deal with
the city, it will turn its attention to the civic
center and what must be done to improve its
financial stability.

“Like any group that is enthusiastic about its
new adventure there are all kinds of thoughts,
but the focus now is on the mechanics and getting
the administrative and legal stuff in place,”
he said. “Then we can start looking forward and talking about those kinds of things.”
He said the Coalition did a “deep dive” on
the arena’s finances and believes there is opportunity
to reduce its operating deficit.

During his presentation to the Common
Council, Burke said that assuming nothing
changes, the group anticipates an operating
loss of $550,000 in 2015–about where it has
been in previous years–but expects a deficit
of about $250,000 in 2016.

This assumes that all contracts, including
those with arena manager Global Spectrum
and anchor tenant the Adirondack Flames of
the American Hockey League, are maintained.
Bartholomew said the arena was profitable
once, earning about $150,000 a year during the
time–1979 to 1999–when the Adirondack
Redwings of the AHL played there.
“A lot of economic conditions have changed
since then,” he said.

He said the civic center was hurt by the
opening of Albany’s Times Union Center in
1989–and the subsequent addition of a
professional hockey team to compete for that
audience–as well as renovations at Proctor’s
Theatre in Schenectady, The Palace Theater in Albany and the Saratoga Performing Arts
Center. These venues not only competed for
the same, limited, entertainment dollars but
prompted some family events, such as the
Ringling Brothers Circus and Disney on Ice, to
split their regional visits between Glens Falls
and Albany. Corporate sponsors had to split
their money as well.

“That all contributed, plus the economy
over the last few years in Glens Falls, plus the
tax cap imposed on municipalities and school
districts,” Bartholomew said.

However, Bartholomew said that by stirring
up community support for the civic center, the
Coalition is taking a page from the playbook of
some of its competitors.

“If you look at our area–look what Philip
Morris at Proctor’s has done,” he said. “They
are in the midst of a $23 million campaign to
extend the stage to accommodate full Broadway
shows. Phil has energized the greater
Schenectady area and as a result the contributions
are pouring in. Marcia White at SPAC
has done a great job in raising money privately
and publically. That is the model that the civic
center has to undertake.”